The World Health Organisation declared the COVID-19 a global pandemic which brought another round of extreme volatility in the markets. Wall Street witnessed another dreadful day and was in a sea of red as a lack of details on the stimulus program dampened risk sentiment.

Widespread fears caused major equity benchmarks to fall into bear market territories. The drumbeat of bad news is resonating in the financial markets while investors await for actions from government and central bankers to shore the global economy. 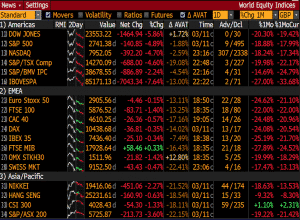 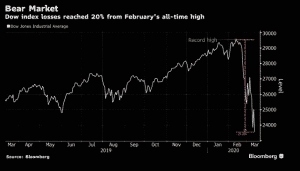 In the FX market, major currencies were weaker against the US dollar. As the attention remains primarily on the widespread of the virus, traders are piling into safe-haven assets in anticipation of stimulus intervention in the markets.

The Japanese Yen and the Swiss franc were stronger against the greenback backed by haven demands. 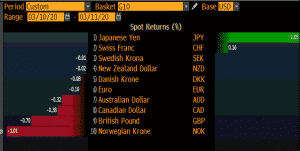 The Bank of England joined its peers in slashing interest rates and made a 50 bps emergency interest rate cut. The GBPUSD pair fell below the 1.29 level as traders were unimpressed by the rate cut and the proposed spending. 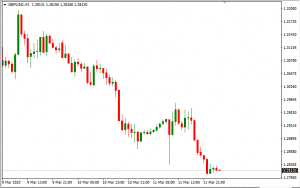 Oil market remained under pressure due to a demand and supply shock combined with a price war between Russia and Saudi Arabia. Both parties also plan to increase oil production capacity. As of writing, WTI and Brent Crude has consolidated in the vicinity of  $33 and $36 respectively. Traders will be watching closely for signs or attempts to mediate a truce in the coming days for fresh trading impetus.

Despite the risk-off environment, Gold struggled to edge higher dragged by a stronger US dollar. Given the current uncertainties, the downside might be limited unless the hopes of stimulus matched expectations.

Any meaningful pullback might still be seen as a buying opportunity. However, traders need to continue to monitor developments on the virus to gauge if there is any improvement. 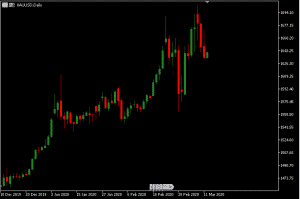