October tends to be the most volatile month of the calendar. At the moment, this week’s volatility shows that October is living up to its reputation. Global growth fears have crawled back into the markets as investors digested a slew of disappointing economic data.

The US economy has remained quite resilient to the global downturn. The Federal Reserve has cut interest rates, but unlike other major central banks, it was mostly viewed as an “insurance” cut due to external risks.

The factory activity contracted to the lowest level seen in a decade at 47.8 which marks the second consecutive month of contraction. The Manufacturing slump is the latest sign of the impact of trade tensions on the US economy. 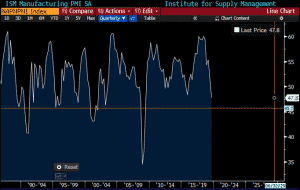 The services sector also fell to the lowest level in the past few years. Even though the services sector remains in the expansionary level, the sharp fall from 56.4 to 52.6 shows the slow pace in the face of a global slowdown fuelled by fears of trade tariffs. 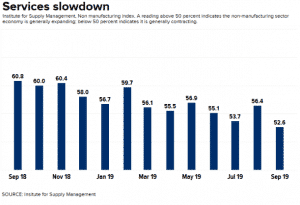 Ahead of the Nonfarm payrolls, the ADP Employment Change came slightly below expectations at 135K. However, the downward revision from 157K to 135K for September shows that the private sector employment is not growing in the US. 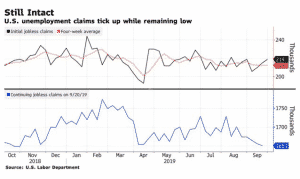 The labour market has been a strong spot for the US economy. This week figures are showing that probably the slowdown in the manufacturing sector has spread in the labour market. Nonfarm payrolls will be of utmost importance this week for investors to reassess their expectations from the Fed.

Major currencies were mostly stronger against the US dollar. The Nonfarm payrolls will be key in determining a direction for the greenback.

The RBA made its third rate cut this week as widely expected. However, the dovish stance from the Governor who expressed concerns about jobs growth and stated that it was reasonable to expect an extended period of low rates was strong an indication that about more rate cuts. 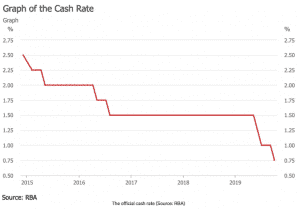 The economic data released so far this week have raised expectations of a rate cut this month. The nonfarm payrolls will be closely monitored for more insights on the labour market and the US economy. 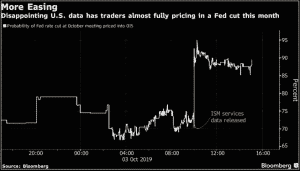 Across the week, Brexit news was quite positive as the Prime Minister submitted its new plan for Brexit which did not appear to have been rejected at first glance. The new Brexit proposal will see Northern Ireland stay in the European single market for goods, but leave the customs union.

However, as the week comes to an end, the European Leader dubbed the new plan as “unconvincing” while the Irish Prime Minister stated that the deal fell short in a number of aspects. Investors will monitor developments as the UK Prime Minister is expected to attempt to convince Brussels and Ireland on Friday and over the weekend.

The Myth of October saw global equities tumbled at the start of the week. On Thursday, the prospects of further easing policies as investors eyed the deteriorating manufacturing activity, and slowing job growth in the US, investors pushed equities higher which helped major US equity indices to climb higher. 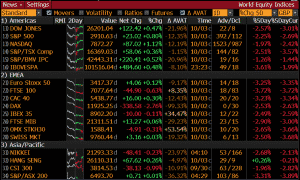