The Lockdown, the Fallout and the Roadmap to Recovery 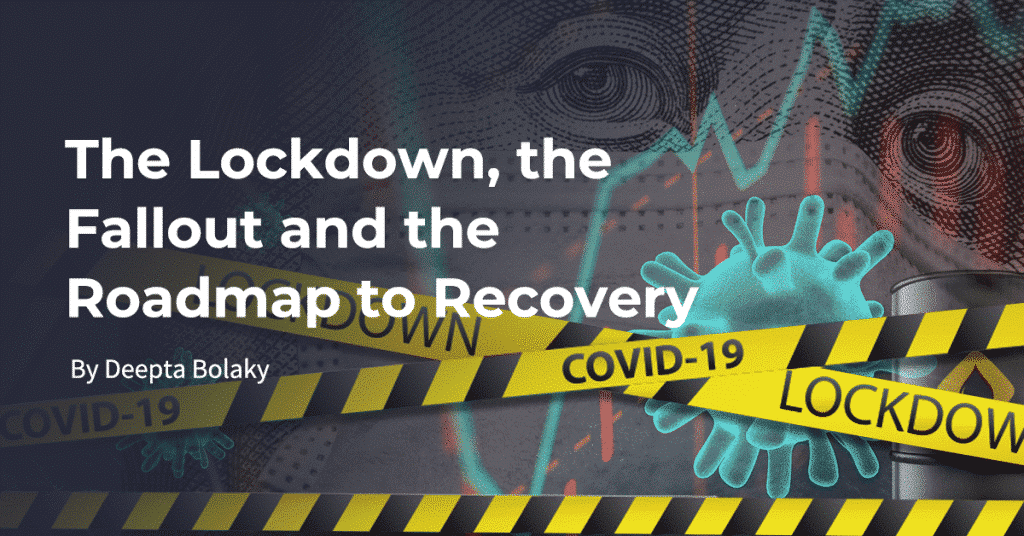 In an abrupt and unprecedented manner, the world witnessed a mass halt to global activities due to the pandemic. Governments and central banks rushed in to intervene and support the global economy with unconventional measures to cushion the impact of the coronavirus on their economies and ease market strains.

As the virus spread quickly across the globe, the world has gone remote, forcing employers and employees to rethink how to operate in a New Virtual Reality. Similarly, investors are faced with a new normal and are at an inflection point where there is a pressing need to reshape their investing strategies.

The oil price war is over for now and the OPEC+ group has also agreed to a historic production cut in early April; though a little too late considering how the situation unfolded during the month. Oil demand took the biggest hit seen in years at a time where production was reaching new highs.

The world is running out of spare room to store the fast-expanding glut that the pandemic has created. The damage initially caused by the price war was irreversible during such pandemic. The lack of storage capacity triggered a big plunge in crude oil prices.

A situation of more sellers than buyers

On April 2020, WTI futures for May delivery traded at around negative 37 for the first time ever, reflecting the urgency of sellers to offload their contracts to avoid taking physical deliveries given the pandemic-induced circumstances. 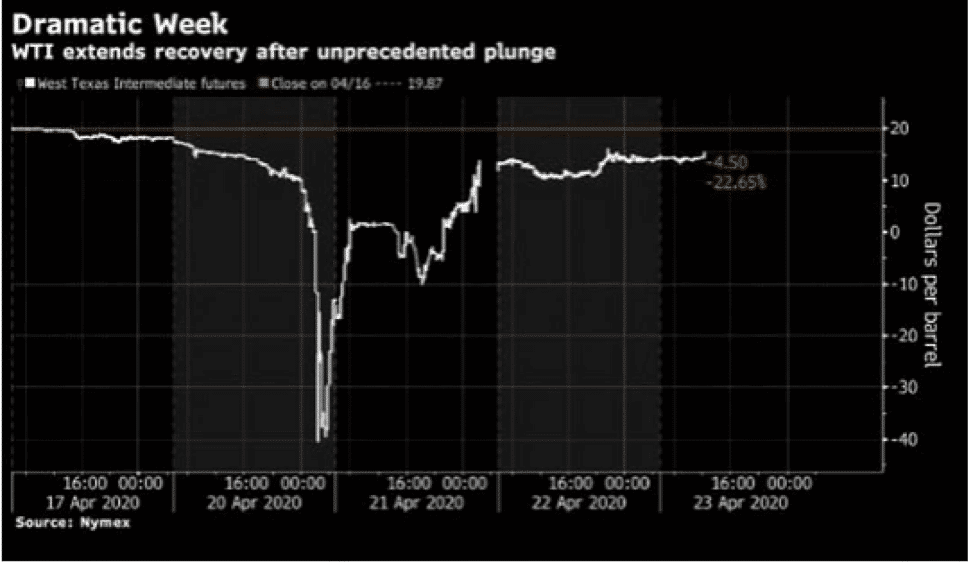 What to expect in the coming months?

There is no quick fix for rebalancing the oil market. In such volatile markets, it is hard to predict what will happen with the June contract as the storage capacity remains a primary source of concern.

Oil future prices took another blow when one of the largest oil funds, the United States Oil (USO), filed an SEC filing and revised its investment in oil future contracts to concentrate on contracts that are further out in the future.

Crude oil prices have remained under heavy selling pressure throughout the month. The near-term outlook for the oil market remains grim but investors are hopeful some recovery will take place when:

The International Monetary Fund (IMF) has predicted in its 2020 World Economic Outlook that the economic impact of the COVID-19 pandemic might result in the “worst recession since the Great Depression”. The IMF expects the world economy to contract by 3% in 2020 due to the magnitude and speed of the collapse in activity following the various forms of lockdown seen across the globe.

Attention was on the GDP figures of the world’s two largest economies!

Earlier this month, China reported a deep contraction of 6.8% in GDP in the first quarter. It was not surprising given that China exercised strict lockdown measures and put a halt to activities throughout most of the quarter.

China has slowly resumed activities since the beginning of the month as the worst of the pandemic appears to be over. Manufacturing and trade data has been more upbeat which has risen expectations of a gradual return to normal if China avoids another wave of the virus.

Investors will be ending the month with the US GDP report that will show the first wave of the impact of the pandemic. After more than a decade of expansion, the US economy was expected to contract by 4% with a steeper contraction in the second quarter. 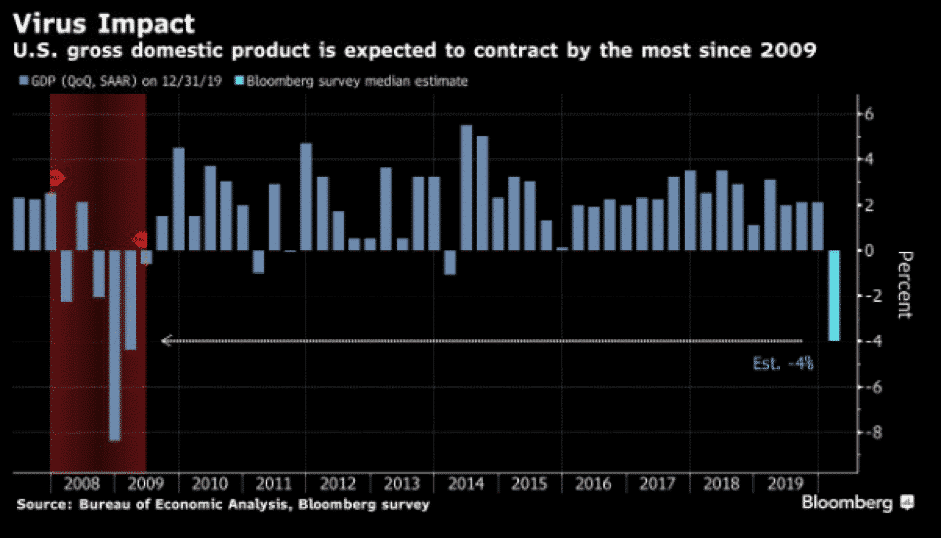 As of writing, the preliminary figures show a worse-than-expected contraction of 4.8%, which is the first sharpest decline since the Great Recession. The figures echoed the IMF warnings!

Earnings results were widely expected to highlight the pain inflicted by the coronavirus-induced crisis. Even though investors were expecting a tough earnings season with withdrawn forecasts, confusion and uncertainties about the 2020 outlook, the quarterly results are also meant to reveal how certain industries are affected by the virus and how those insulated from the virus are managing the pandemic.

Everything about the pandemic is unpredictable and therefore, companies in every sector are facing the challenges to communicate their guidance. Companies within certain sectors will perform worse than others.

The earnings season kickstarted with major US banks. As widely expected, banks like JP Morgan, Wells Fargo, Citigroup, Bank of America, Goldman Sachs and Morgan Stanley all reported a significant drop in profits. Overall, the banks made significant provisions for credit losses and saw major declines in asset management revenues.

Banks like Goldman Sachs and Morgan Stanley have flared better and their share price is currently up by 15% or more.

Our attention move to the big tech giants like Alphabet, Facebook and Netflix which have been reclassified to the communications sector in the last few years.

Netflix was among the first few to report its quarterly results. The company reported a $5.8B in revenue with a year-on-year growth of 27.6%. The number of subscribers came above estimates and more than double its target with 15.77 million paid subscribers. The substantial growth came in March when the lockdown and social distancing measures forced many more households to join the TV and movie-streaming service.

However, the company warned that revenue and growth might decline mostly due to probable lift of the confinement measures, a stronger US dollar that is impacting international revenue growth and the lack of high-quality content following the pause in production. Its share price reached a high of around $440, but as of writing, it is currently trading at $411.

Alphabet, Google’s parent company, issued its quarterly results after the bell on Tuesday. The company reported an increase of 13% in revenue for Q1 2020, compared to a 17% increase for the same quarter a year ago and earnings of $9.87 per share. Based on expectations, it was a miss on earnings. However, the company has performed well given the challenges and is cautiously optimistic tones for the second quarter. Alphabet’s share price rose by almost 9% on Wednesday.

Facebook – The social networking giant reported earnings of $4.9B or $17.10 per share for Q1 2020 compared to earnings of $2.43B or $0.85 per share in Q1 2019. The company doubled its earnings. Similarly to its peers, Facebook warned of the unprecedented uncertainty and withdrew its revenue guidance for the rest of the year. Its share price jumped by 6% to trade at $194.20.

Both Google and Facebook have seen a significant reduction in demand for advertising, but the companies still managed to stay massively profitable and adapt in a coronavirus-fueled environment.

Microsoft released strong results in the third quarter of its fiscal year 2020. Overall, COVID-19 has had a minimal net impact on total revenue. As people around the world shifted to work and learn from home, there was a significant increased in demand for Microsft’s Cloud business to support remote works and learning scenarios. Compared to the corresponding period of last fiscal year:

Microsoft did not only top revised COVID-19 estimates but also the earnings that were expected back in January before the coronavirus crisis.

All eyes will be on Apple Inc. which will report earnings on Thursday, April 30, 2020, after market close. Apple’s conference call to discuss second-quarter results will be held on the same say at 2:00 p.m. PT / 5:00 p.m. ET.

Unlike the consumer staples sector which includes companies that produce or sell essential products, consumer discretionary stocks are mostly companies that do not manufacture or sell essentials. The various forms of lockdowns have left many people without employment. For example, the US economy lost around 20 million jobs over the last few months. It took the US like a decade to add those jobs in the economy.

Amazon.com Inc has always stood out from the lot because of its status as a leading e-commerce retailer. Investors will closely watch its earnings reports for guidance. The company Amazon.com, Inc. will hold a conference call to discuss its first quarter 2020 financial results on April 30, 2020, at 2:30 p.m. PT/5:30 p.m. ET.

Worldwide sharp contractions in the manufacturing sectors, warnings of economic contraction and fears of a recession in the month of April have created panic and volatility in the financial markets.

A look at the All-Country World Index shows that global equities are poised for their biggest monthly gain since the Great Recession. The biggest driver is the unprecedented and unconventional actions by central banks combined with massive fiscal stimulus.

Global equities are surging even though economic data is painting a different picture. 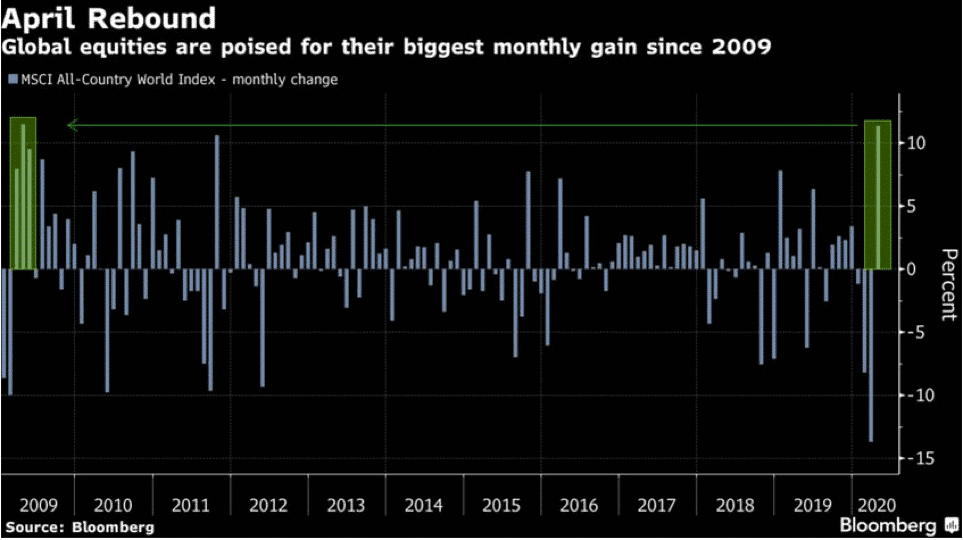 Towards the end of the month, some positive developments on the novel coronavirus cases and the possibilities of earlies opening plans of certain major economies has driven markets higher. Mega-cap stocks like Microsoft, Amazon, Facebook and Google have also contributed to lifting sentiment and drove the rally while smaller-cap companies are bearing the brunt of the pandemic.

There is still hope for the economy despite the tough circumstances. V-shaped or U-Shaped Recovery? New infections have slowed down but there is still no vaccine and economies are at risk of a new wave of infection.

A vaccine could have increased expectations of a swift recovery like a V-shaped immediate recovery in the third quarter or a U-shaped recovery with stability more towards the second half of the year.

However, at the moment, governments are easing lockdown restrictions and investors will be back to a New Normal to replace the current “normal”. The economy is trapped in an unusual type of recession created by the novel coronavirus.

The roadmap to recovery will be progressive and dependent on the governments approaches towards easing lockdowns. It will be different across the globe depending on how governments feel about the situation and the risk of a second wave of the virus.

The path to recovery will be a leaning process given the unknown territory!

Apple Inc. and Amazon.com, Inc The last two of the five most prominent technology companies, Apple Inc. (AAPL) and Amazon (AMZN), which form part of the FAANG group, have reported interesting quarterly earnings and highlighted their actions during this unprecedented uncertainty. Apple Inc. The company missed on earnings estimates but reported b...

Equity Markets US stocks ended lower paring modest gains as sentiment faltered towards the end of the trading day, dragged by the tech sector, a sig...