US markets dropped last night, reversing what was looking like a positive session to finish as the worst single session in the month of April across the major US indexes.

Sparking the sell off was a report that the US administration was eyeing a proposal to increase the capital gains tax rate on wealthy individuals, almost doubling the current rate.

Tech companies Netflix (NFLX) and Intel (INTC) also beat earnings expectations but disappointed on forward guidance resulting in drops in those stocks and causing a further headwind for the NASDAQ.

World equity indices are mostly negative for the week as the strong rally in Q1 has stalled somewhat this month.

This week has seen a fairly quiet week on the economic announcement front as the US Federal Reserve entered its blackout period due to its meeting next week. We did see two major risk events with both the Bank of Canada and European Central Bank releasing their Monetary policy statements.

The BOC released their statement on Wednesday where they left rates unchanged at 0.25%, and reduced its weekly asset purchases to C$3bn per week from $4bn to reflect “the progress made in the economic recovery”.

Both these announcements were widely predicted and were no surprise to the market, what did surprise the market was the bank signalling the second half of 2022 as a timeframe for tightening of rates, previously the bank’s guidance was 2023 as to where they saw economic conditions improving enough to begin a tightening cycle.

The Canadian dollar surged 1% against the US dollar on this hawkish surprise.

Last night we saw the ECB release its monetary policy. There was no hawkish surprises this time as the ECB struck a cautious tone as expected.

There was no mention of phasing out the ECB’s pandemic QE (PEPP) program and no significant comments on the EUR exchange rate. The ECB next meets in June and unlike this meeting, there will be a slew of economic data between now and then, the expectation at that meeting is to see some clearer forward guidance from the ECB.

Major currencies were mostly stronger against the US dollar this week. US 10 year bond yields continued to plateau and weaken from the rally in Q1 contributing to the US dollars recent weakness.

The Japanese Yen which has shown the highest positive correlation to bond yields was the best performer and the Canadian dollar turned around a losing week after the hawkish BOC monetary policy statement.

The Aussie dollar lagged behind as sellers piled in as it entered its 0.78c USD resistance zone causing a technical break to the downside. AUDUSD is now sitting in the middle of its 2021 range at around 0.77 USD. 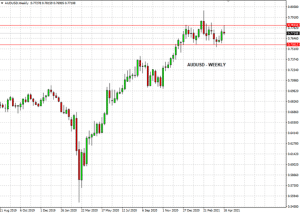 BTCUSD dropped as much as 15% over the weekend, recovering somewhat to gap down on the Monday open at around 56k USD, a drop of around 8% from Friday’s close.

The sell off began when a tweet from a usually reputable source started a rumour that the US Treasury was to prosecute money laundering charges against several financial institutions.

BTCUSD has continued down through the week, failing to fill the gap and touching on the 50k USD per coin level. 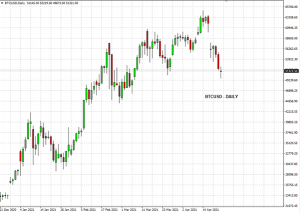 For the first time in two years, Bitcoin’s “dominance” of the crypto-space has fallen back to 50%, with Ethereum being the biggest gainer. Ethereum now has a market cap of almost $295 Billion USD, pushing it above that of Exxon Mobil, Intel, and Coca-Cola, seeing it its highest value relative to BTC since August 2018. 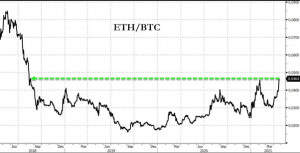 Week Ahead: Big tech reports and the Fed back in action

Equity Markets US stocks bounced back with a broad rally, the S&P 500 set an intra-session all-time high as investors returned to buy the dip after Thursday's tax increase inspired sell-off. Earnings on Friday included Schlumberger Limited (SLB.NYSE) who beat Q1 earnings expectations and gave positive forward guidance on growth for the seco...

Intel, the US technology giant reported its Q1 earnings after the closing bell on Thursday. The company reported revenue of $18.57 billion, above a...