US markets broadly rallied last night with both S&P 500 and NASDAQ hitting all time highs and the Dow Jones jumping to finish up over 300 points for the session. 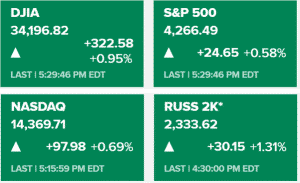 US Markets were given a boost by the Biden administration striking a tentative bipartisan $579 billion U.S. infrastructure deal with Republican lawmakers. This announced stimulus particularly helped the blue chip industrial stocks on the Dow, with the likes of Caterpillar (CAT) rallying strongly on the announcement.

This week we have also seen a concerted effort from the Federal Reserve to calm markets and put some context to the Feds statement released last week that caused the late week sell off.

Many Fed governors and Chairman Powell himself all made statements that they still believed inflation risks were transitory and that the labour market was some way off its recovery before tapering of bond purchases or rate rises would occur. This soothed investors’ fears of a tightening in Fed policy causing a turnaround in the market with last week’s losses being mostly erased.

The BoE released its monetary policy statement overnight, going into the meeting GBP bulls were optimistic that the BoE would strike a more hawkish tone mirroring the US Federal Reserve statement last week. While the BoE statement was a little more upbeat than might have been expected, ultimately the bulls were disappointed as Bank’s Monetary Policy Committee (MPC) gave no new clues on rate hike timing and striking a dovish tone on inflation, sticking to the narrative it was “transitory”.

GBPUSD was the worst performing major FX pair of the night on the back of this, dropping around 40 pips despite a backdrop of USD weakness.

Federal Reserve Chair Jerome Powell on Tuesday testified in front of the US congress where he reaffirmed the Fed’s intent to encourage a broad recovery of the job market, and not to raise interest rates too quickly based only on the fear of coming inflation.

This worked to soothe markets, seeing a multi-day rally in equity markets that erased the drop from last week.

European Central Bank President Christine on Tuesday testified before the European Parliament Economic and Monetary Affairs Committee. Lagarde struck a cautious and dovish tone where she said accelerating U.S. inflation that prompted the Federal Reserve to shift its view of price risks will have only a limited impact in the euro area.

Lagarde also stated that “ECB Still has room for rate cuts if needed”, this saw an already weakened Euro drop further against the greenback.

Most major FX pairs outperformed the USD this week as the greenback retraced some of its gains that it saw on the back of the Fed meeting last week. Commodity currencies performed particularly well as commodity prices rebounded somewhat on USD weakness.

After setting new 2021 lows after breaking its range on the back of a resurgent USD last week, AUSUSD did retrace some of the losses this week.

Old support levels at 0.76c and 0.77c USD could now act as resistance to slow any further advances in AUDUSD. The July 6 RBA rate meeting will likely be the next catalyst in a move in AUDUSD from around these levels.

Equity Markets World equity markets staged a decent comeback last week after the shock of the US Federal Reserve’s hawkish pivot caused a sell off the week before. Last week saw multiple central bank members from the Fed, European Central Bank and Bank of England talking down inflation fears and holding the “transitory” narrative, this he...

Equity Markets US equity markets bounced back on Monday after the significant falls from late last week. Dip buyers and pile back into some of the cy...