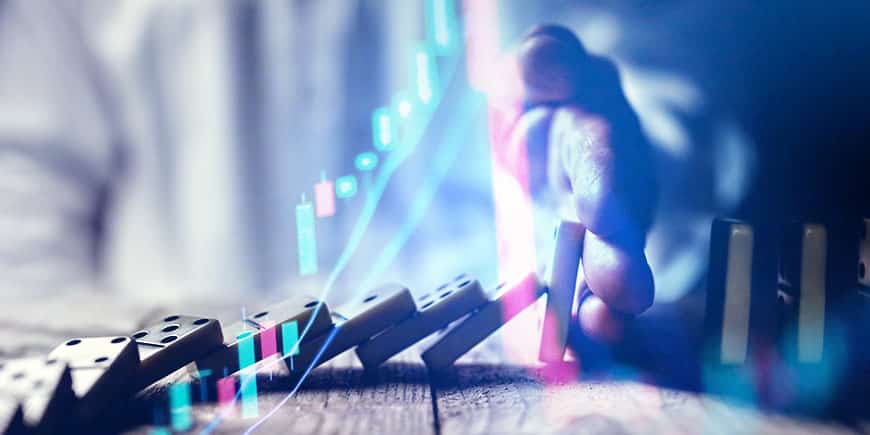 The world is facing an economic crisis triggered by an unprecedented health crisis and an oil price war. It was another week of extreme volatility in the financial markets:

The growth rate of new cases remains the primary concern. Coronavirus cases surpass half a million worldwide with 526,008 new cases and more than 23,000 deaths. The total number of cases in the United States has exceeded China and Italy. The worst is probably not yet over, and we should expect more forms of lockdowns or quarantine measures in the coming days and weeks.

Faced by an unprecedented health crisis, governments across the globe are forced to take bold actions to contain the virus. Those various forms of lockdowns come at a high cost for economies due to a halt in global activities. The economic fallout will still be significant even though central bankers and governments are rushing to support their economy with massive stimulus packages or unusual policy relief tools.

It is not yet known when the crisis will be over, and those actions are deployed to ease the pain but will not eliminate the pandemic-induced economic damage.

The rise in gold prices supports the narrative that investors are currently being reassured that the rescue packages will aid the global markets for the time being. After reaching a high of $1,680, the precious metal was liquidated to meet margin calls or other liquidity requirements following the worst turmoil in the financial markets in more than a decade. 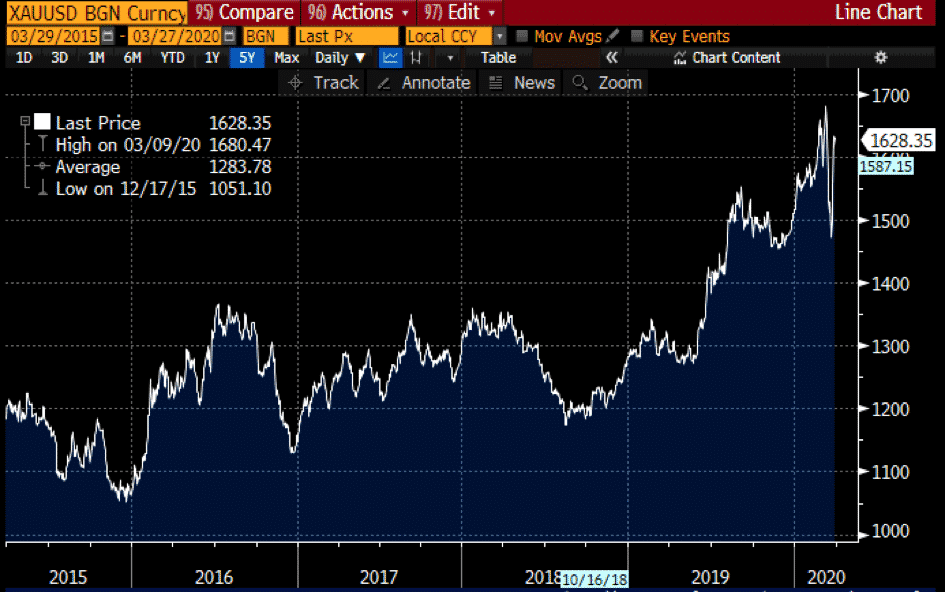 Now that the Fed has removed the liquidity fears and investors flew back to safety with the haven asset. The sentiment around the yellow metal looks positive:

Demand: In such times of uncertainties, investors are becoming desperate to buy gold.

An increase in demand combined with supply issues is therefore putting upward pressure on the price of gold. Gold rose back above the $1,600 level after the passing of the $2 trillion US stimulus package.

Oil Market – The Push for Stability

The oil market is trapped in a simultaneous demand and supply shock. In other words, there is a flood of supply at a moment of diminishing demand.

Demand: Different forms of lockdowns across the globe due to the pandemic means empty roads, grounded aircraft, plunging car sales and disrupted supply chains. These industries are key consumers of oil. 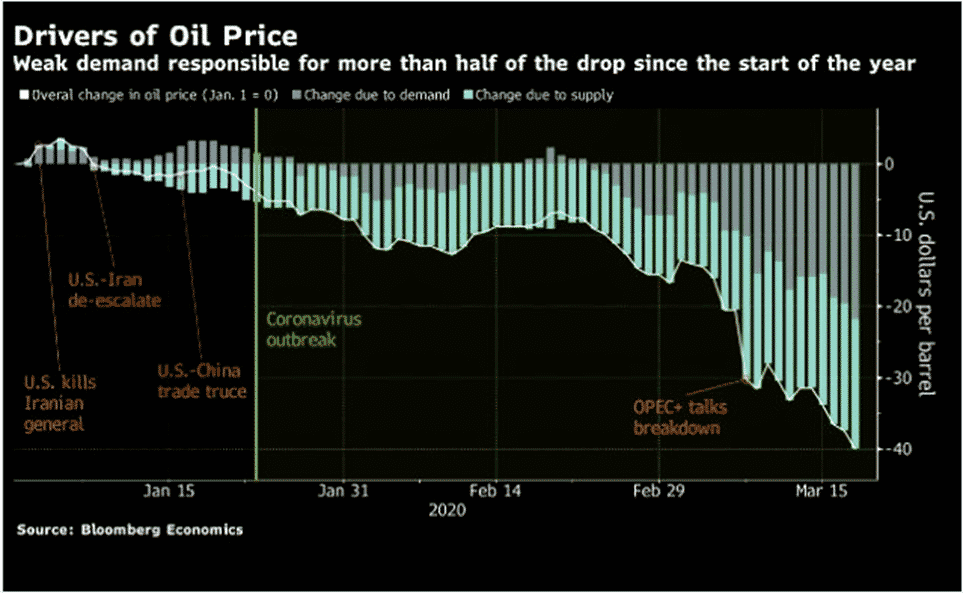 Supply: An oil price war between Saudi Arabia and Russia was the tip of the iceberg and triggered the flash crash in March. The oil kingdom raised output to full capacity to fight a price war with its rivals, destabilising the oil market at a critical time during the coronavirus pandemic.

Crude oil prices tanked by approximately 45% to 48% this month. WTI and Brent Crude have dropped to a multi-year low at $20.50 and $24 but have stabilised and consolidated around $22 and $26 levels, respectively, towards the end of the week.

An improvement in risk appetite and hopes of talks between the US and Saudi Arabia to stabilise the oil market are providing a temporary floor to the freefall in oil prices. However, crude oil prices are still navigating in a bearish environment.

Coordinated and massive rescue packages brought some relief to the worst rout in the stock market since the GFC. Global equities were better bid this week, and major equity indices recovered a semblance of normality with most gains around 10% or higher. 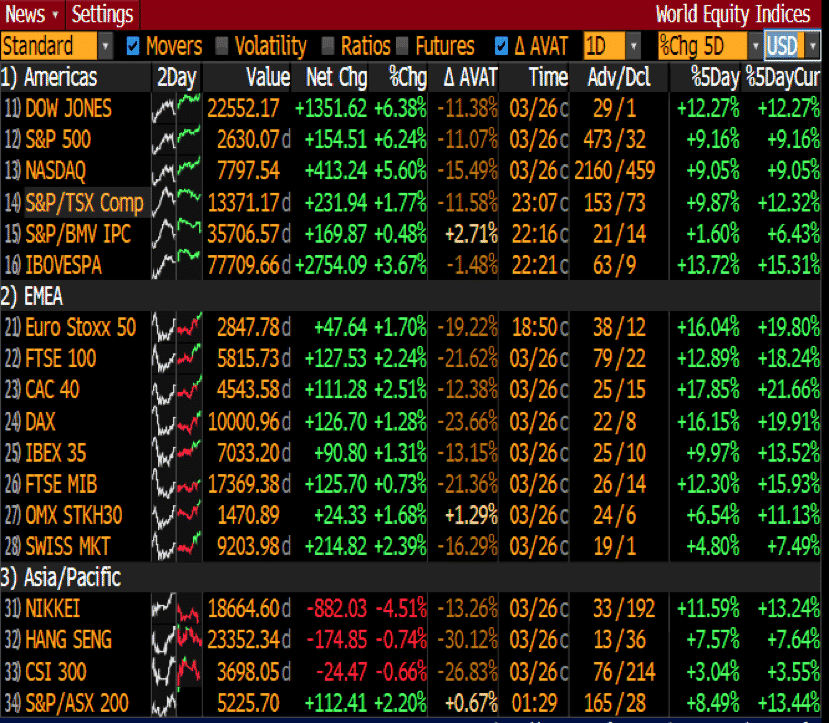 In certain cases, a bear market has turned into a bull market. The Dow Jones Average Industrials rose by a staggering 21% in the last couple of days. However, the technical bull market says little about what is yet to come and may not yet be a lasting rebound. 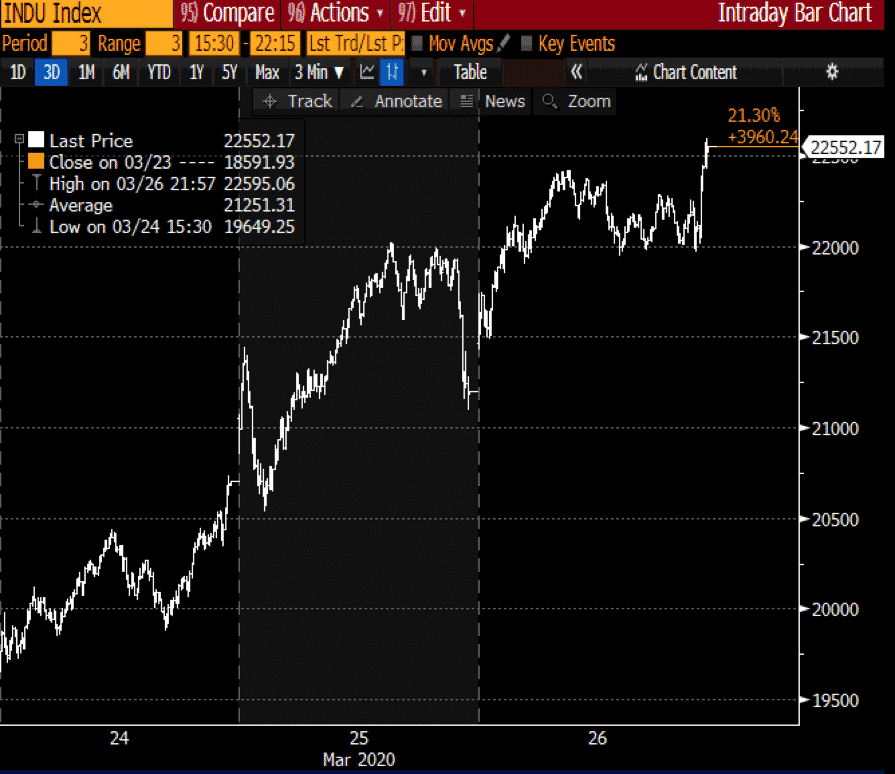 FX – The US dollar

The market movements in the currency markets were mostly around the US dollar. In the last few weeks, the greenback has gained ground, primarily due to its safe-haven status and funding purposes.

The demand for the US dollar has receded following the massive stimulus package and the Fed’s commitment to using various tools to safeguard the US economy, which includes “unlimited QE” and the Fed as a lender of last resort. On the economic front, the US Jobless Claims rose to 3.28 million in March, adding extra pressure on the greenback.

Nearly all the major currencies rebounded decisively and were firmer against the US dollar this week. 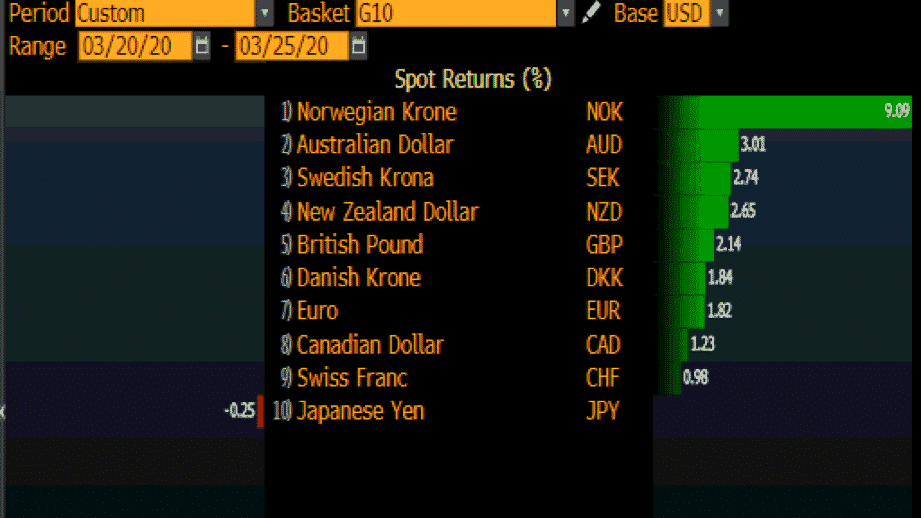 The US dollar index which tracks the performance of the greenback against a basket of currencies dropped from its three-digit level to 99.35. However, the index remains in elevated levels as, given the depth of the US bond market, the greenback remains as an important source of liquidity. 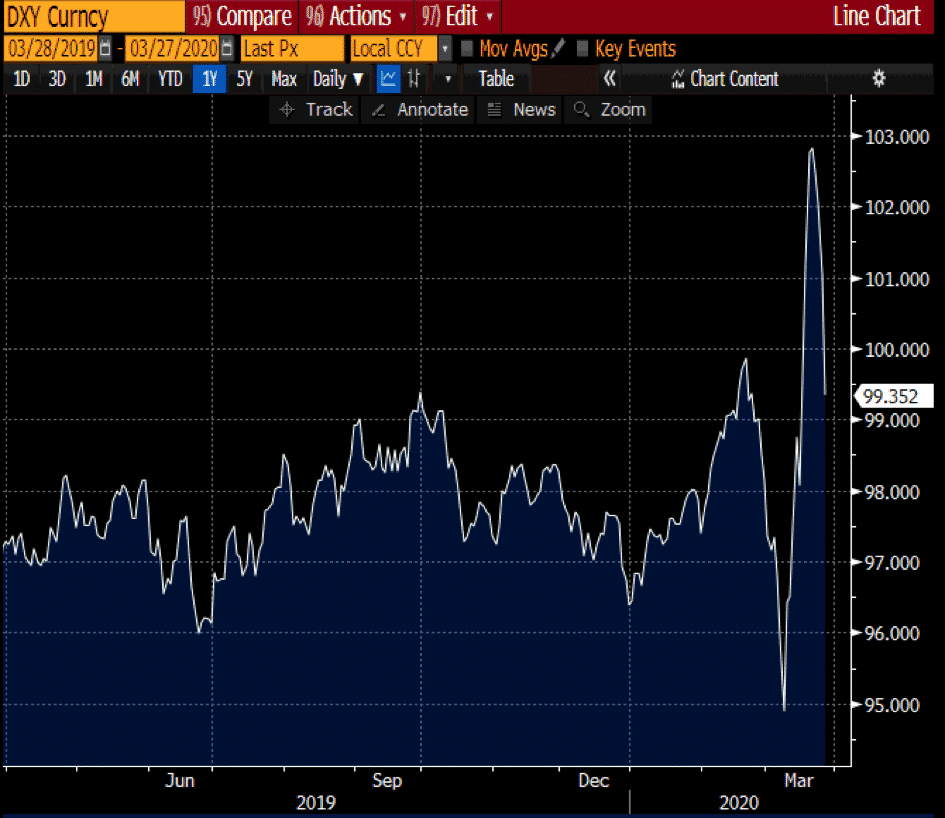 The King Dollar may go through a bumpy ride but will likely remain on the upside to a certain extent as markets are still very much unstable despite economic stimulus.

Disclaimer: Articles and videos from GO Markets analysts are based on their independent analysis. Views expressed are of their own and of a ‘general’ nature. Advice (if any) are not based on the reader’s personal objectives, financial situation or needs.  Readers should, therefore, consider how appropriate the advice (if any) is to their objectives, financial situation and needs, before acting on the advice. For more information on trading, check out our CFD trading courses.