The bloodbath continues in the stock market and major equity benchmarks are on the brink of bearish territory. The massive plunge in the markets revived fears of the “Black Monday” meltdown in 1987. 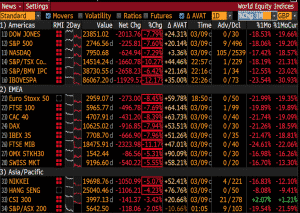 Trading was halted for 15 minutes in the US to avoid a repeat of the crash in the equity seen three decades ago. The worldwide panic and the chaos in the oil market which caused a Brent Crude to fall by 26% spooked investors.

It is the worst day for the financial markets since 2008.

Wall Street ended in a sea of red with all the three major US benchmarks deep in negative territory: 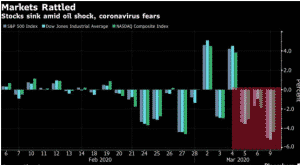 Unlike the equity and commodities markets, trading in the currency market was not as volatile. In a classic reaction to a risk-off environment, investors piled up in safe-haven currencies. The Japanese Yen crosses gapped lower as the Yen gained haven flows. 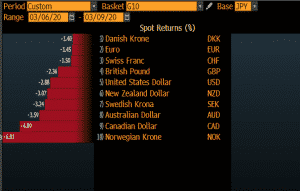 Attention remains on central banks’ intervention. The Federal Reserve, Bank of Canada and Reserve Bank of Australia were among the first few major central banks to slash their interest rates amid the growing coronavirus concerns.

The focus turns to the European Central Bank among others.

Oil market tanked on Monday as panic gripped the financial markets. The sell-off accelerated following the tensions between OPEC members and Russia over further production cuts. The de-facto leader of OPEC, Saudi Arabia surprised the markets by discounting oil prices to its customers in Asia, the United States and Europe.

After falling below $28 and $32 respectively, WTI and Brent Crude are trading sideways around those levels. A price war between oil-producing countries in an already fragile environment where global demand is expected to fall further due to the coronavirus fears is doing little to combat the rout in oil prices.

Gold price traded above $1,700 following the flash crashes in the markets. Amid growing coronavirus fears, investors are looking for safety with traditional safe-haven assets in anticipation of government responses to combat the spread.

Another country is in lockdown – Italy has extended quarantine measures nationwide. People are encouraged to stay at home in an attempt to halt the spread of the coronavirus. As of writing, gold price retreated from seven-year high to trade around the $1,670 levels. 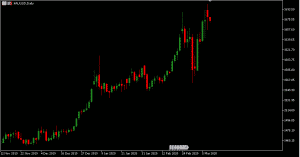