As we progressed through the last month of the year, investors assessed the vaccine updates, Brexit negotiations, US political gridlock and geopolitical tensions.

Global equities swung between losses and gains this week as investors digested contradictory headlines on key themes driving the price action in the markets. 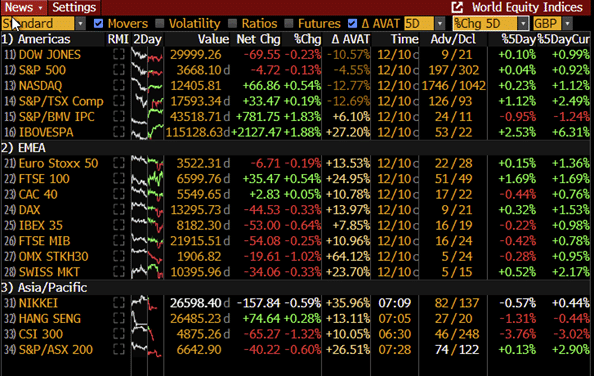 Brexit negotiations have been dominating headlines throughout the week ahead of the looming year-end deadline. Investors were taken on a roller-coaster ride following intensifying deal negotiations and on-and-off positive and negative announcements. A joint statement by European Commission resident Ursula von der Leyen and UK Prime Minister Boris Johnson set a sour but hopeful tone to negotiations:

“As agreed on Saturday, we took stock today of the ongoing negotiations, We agreed that the conditions for finalising an agreement are not there due to the remaining significant differences on three critical issues: level playing field, governance and fisheries. We asked our Chief Negotiators and their teams to prepare an overview of the remaining differences to be discussed in a physical meeting in Brussels in the coming days.”

The meeting in Brussels and the announcement of an “agreement in principle” renewed hopes of a deal just in time. However, as the week comes to an end, the “no-deal” Brexit scenario creep back into markets:

EU Budget: On the other side, the European Union is set to move ahead with the agreement on the €1.8tn seven-year EU budget and recovery fund as Poland and Hungary lift their objections at a summit at Brussels.

Pfizer and BioNtech confirmed on Thursday that the FDA advisory committee voted in support of the potential first emergency use authorisation for the use of the vaccine in the US:

One of Australia’s most valuable companies announced its update on its COVID-19 vaccine developed in collaboration with the University of Queensland. The Company revealed while the Phase 1 trial “elicits a robust response” towards the virus and “has a strong safety profile”, the molecular clamp antibodies did cause a false positive on a range of HIV assays.

In agreement with the Australian government, the Company also announced that they will not carry forward with Phase 2 and 3 trials and will concentrate on the production of AstraZeneca and University of Oxford vaccine which is yet to pass regulatory approvals.

CSL’s share price tumbled on the open following the COVID-19 vaccine trial updates. As of writing, the Company’s share price has dropped by more than 3% and is currently at around $291.60. 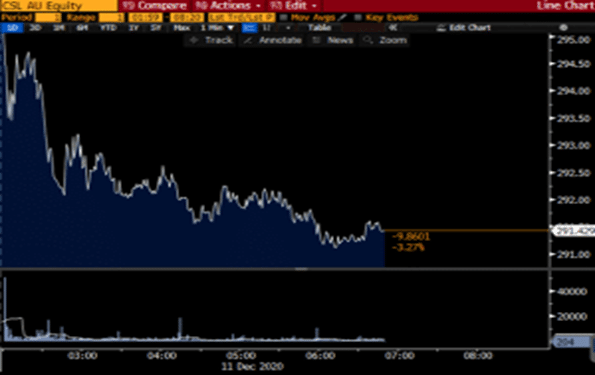 IPOs: Two big companies, DoorDash and Airbnb made their debut on the stock exchange this week and made huge gains. The home-rental company more than doubled in their trading debut. 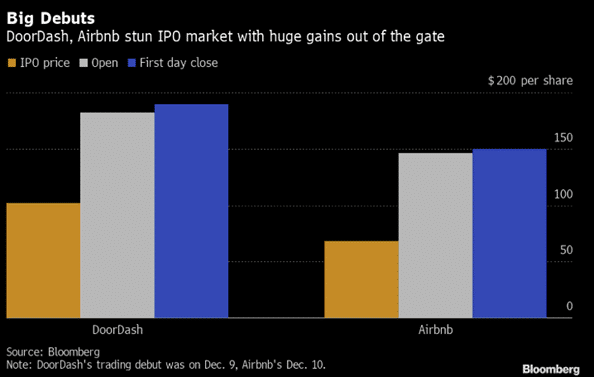 In the forex market, the G10 currencies remained stronger against the US dollar. Commodity-related currencies and the Euro were among the best-performing currencies while the British Pound remained under pressure amid Brexit woes.

The Aussie dollar was boosted by upbeat economic data. The Westpac-Melbourne Institute reported strong consumer confidence. The Index rose by 4.1% to 112 in December, reaching the highest level since 2010. The consumer confidence index hits a 10-year high indicating that sentiment has fully improved from the COVID recession. 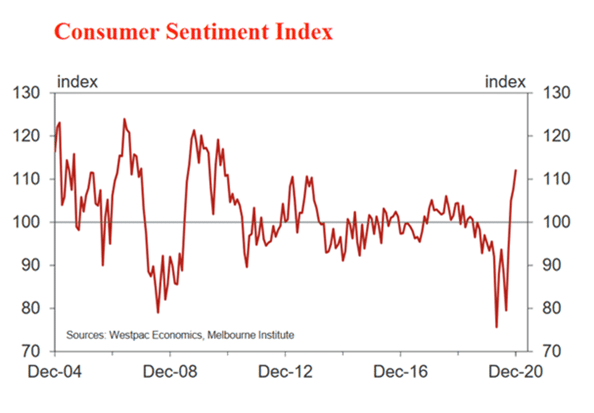 The highlights of the index are mainly centralized around the speed of the recovery seen after just eight months into the pandemic compared to the GFC and the recession seen in the early 1990s.

The House Price Index rose by 0.8% in the September quarter and 4.5% over the last twelve months. The rise was across all capital cities except Melbourne. The AUDUSD pair rallied above the 0.785 level. As of writing, the AUDUSD pair is trading at 0.7559.

The most important event for the single currency was the ECB interest rate decision and monetary policy statement. As widely expected, the ECB keeps interest rate unchanged and expanded its stimulus program to support the economy following the second wave of the outbreak in the region. On the economic front,

Production: In October 2020, production in industry was up by 3.2% on the previous month. 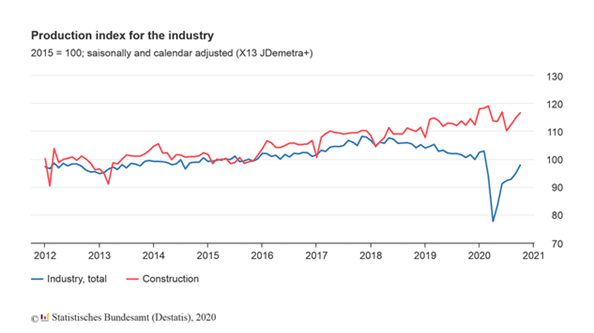 The EURUSD pair is currently trading at around 1.2157 lifted by the ECB stimulus program and the EU budget alongside some upbeat economic data.

The Pound was mostly driven by the Brexit headlines around the negotiations. The GBPUSD pair dropped to the 1.33 level.

At the start of the week, crude oil prices struggled to edge higher despite the latest positive news ranging from vaccine updates to the OPEC compromise deal as tougher lockdown restrictions, surging coronavirus cases and bearish weekly oil reports weighed on the oil market.

Unlike the API which reported a draw in the weekly crude oil stock to 1.141M in December 4 from previous 4.146M, the EIA reported a rise of 15.189M barrels last week in crude stocks versus expectations for a drop of 1.424M.

The US FDA voting on the vaccine helped the oil market to firm to the upside on Thursday. Brent crude climbed to $50 for the first time since March. 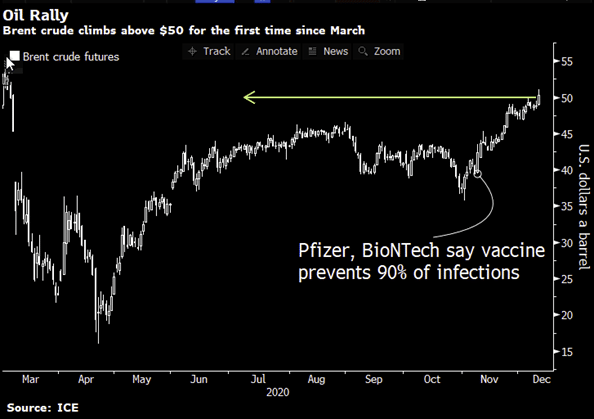 On the technical side, at this level, the UKOil and USOil entered in overbought levels. 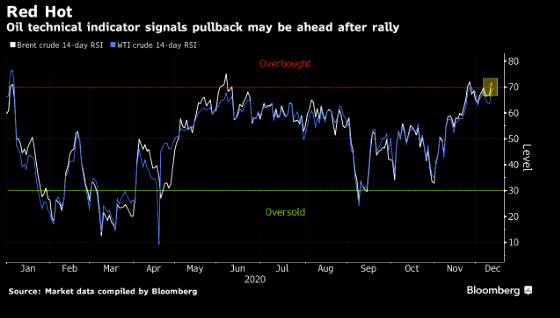 The precious metal swung from gains to losses driven mostly by US stimulus talks and vaccine updates. As of writing, the XAUUSD pair was trading around $1,836.

Disclaimer:  The articles are from GO Markets analysts,  based on their independent analysis or personal experiences. Views or opinions or trading styles expressed are of their own;  should not be taken as either representative of or shared by GO Markets.  Advice (if any),  are of a ‘general’ nature and not based on your personal objectives, financial situation or needs.  You should therefore consider how appropriate the advice (if any) is to your objectives, financial situation and needs, before acting on the advice.  If the advice relates to acquiring a particular financial product, you should obtain and consider the Product Disclosure Statement (PDS) and Financial Services Guide (FSG) for that product before making any decisions. 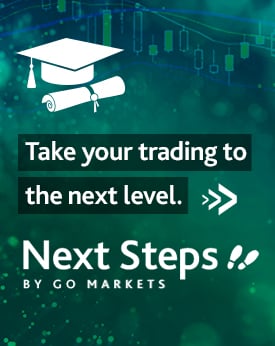