Week Ahead – A Massive Week Ahead

A Massive Week Ahead

Brexit will remain high on the agenda amid the earnings season, several central banks meetings and high-impact economic data. Stocks are flirting with record territory and this week’s events will likely be a decisive week in determining the short-term direction of the markets.

After confirmation that the European Union has agreed to postpone Brexit and is prepared to sign off a 3-month delay, investors will await for the official confirmation on the length of the extension. As determined as the Prime Minister was on leaving the EU with or without a deal, the Benn Act has prevented the UK from crashing out of the EU without a deal.

Brexit uncertainties remain high but investors are reassured that a hard Brexit has been avoided.

Monday Vote: This week, Boris Johnson will call for a vote for a pre-Christmas election on Monday. Technically, the government is unlikely to get the numbers required to call for an early general election which is helping the British Pound to hold on to recent gains despite a lack of clarity on Brexit.

Alternate Route to December Election: However, there is still reason for caution. There may be another way that could help the Prime Minister to secure a December election. The Lib-Dem plan would require the amendment to the FTPA and would only need a simple majority in the Commons. While the plan is still a bit unclear, we note that this may require the Prime Minister to drop the chance of bringing back his Brexit deal to the Commons.

In the rare case, the PM still managed to get two-thirds of the MPs votes on Monday, Parliament will be dissolved on Monday, the 6th of November to allow candidates to campaign for the election.

The UK Budget is also on the radar. Investors will be deprived of the growth outlook and forecasts for the UK as the Chancellor, Sajid Javid delayed the budget. It is unlikely that the forecasts will be published despite the mounting pressure as it might fuel the fears of deep structural problems over Brexit. Market participants will probably keep monitoring to see when will the Budget be published which will be dependent on Monday’s vote.

Global stocks seesawed last week amid a slew of earnings reports and geopolitical risks to finally broke out of their range on Friday. Overall, earnings reports have been expectations, but the profit outlook of companies has somewhat kept a lid on gains.

It will be a big week for the US with tech giants like Apple, Alphabet (Google), and Facebook reporting their quarterly earnings updates.

Other major companies due to release their results will be:

The Fed is widely expected to cut interest rate for a third consecutive time this year. Investors are assigning a 90% probability for a rate cut scenario. However, while a cut is almost “certain”, investors will be looking to see if the Fed is ready to pause. The recent data shows that one of the brightest spots of the US economy – Consumer Spending, is now looking a tad bit gloomy.

But positive trade news may deter the Fed to engage in the speculations for more interest rate cuts.

Investors will monitor the two-day meeting on Tuesday and Wednesday to gauge the path of the Fed at a time where major central bankers are on edge fearing a deeper slowdown than expected.

After the election, the prospects of growth-boosting fiscal policies combined with a resilient economy may keep the BoC on the sidelines. In contrast to the Fed, we expect the BoC to remain steady.

Will the BoJ join the race to the bottom in line with other central banks? Inflation is moving further and further away from the central bank’s target rate. The probability that the BoJ will ease further have risen since last week. 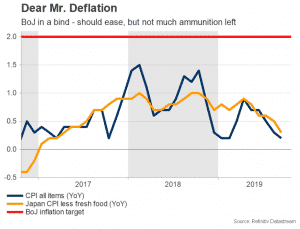 It is Nonfarm Payroll week which market-moving economic data. We will also see preliminary Q3 GDP figures along with a slew of other economic reports:

Aside from a few central bank speeches, we will have the preliminary Q3 GDP and CPI figures which are expected to tick lower. However, the performance of the shared currency will likely be dependent on the direction of the US dollar will likely be set by the Fed mid-week.

The first main event will be the RBA’s Governor Lowe Speech on Tuesday followed by Homes Sales, CPI and Building Permits on Wednesday and Thursday respectively. We will end the week with Manufacturing data on Friday.

However, investors’ attention will be fixated on trade news.

Disclaimer: Articles and videos from GO Markets analysts are based on their independent analysis. Views expressed are of their own and of a ‘general’ nature. Advice (if any) are not based on the reader’s personal objectives, financial situation or needs.  Readers should, therefore, consider how appropriate the advice (if any) is to their objectives, financial situation and needs, before acting on the advice. For more information of trading, check out our online forex trading courses.