It was all about Brexit and the race against time for the UK to exit the EU with a deal. Investors were also kept busy with trade-related headlines and the release of the third-quarter earnings reports.

It was crunch time for Brexit and there was more confidence in the UK exiting the EU with a deal throughout the week. Both parties appear more willing to compromise to reach an agreement. It could have been the three-year-long exhaustion and fatigue of Brexit negotiations that have forced the bloc and Britain to see Brexit through.

The Irish Backstop, the thorniest part of the Brexit deal was replaced just a few hours before the EU Summit was about to begin. The approval of the withdrawal agreement was overshadowed by the Northern Irish Democratic Unionist Party (DUP) formal vote against it after speculations that the DUP supported the deal. 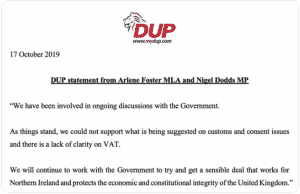 The negotiated agreement is almost the same as the deal agreed with Theresa May but has been tweaked to allow Northern Ireland to remain in the UK’s customs territory, but EU’s customs processes will apply. 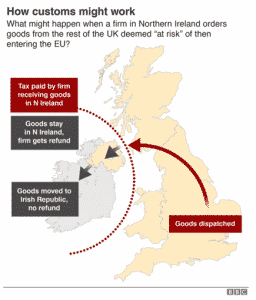 The local currency has been on a volatile ride this week. A look at the GBPUSD pair shows that broad optimism helped the Pound to trade higher in a bullish. The hurdles, the reality of the timeframe of finalising a deal, the DUP formal statement against the proposals on customs and the upcoming Parliament vote has caused the pair to have strong pullbacks as well.

However, the pullbacks of the pair across the week appear to be supported by an uptrend line limiting the fall to the downside. As of writing, the GBPUSD pair is currently trading at 1.2870 after reaching a high of 1.2990 on Thursday. 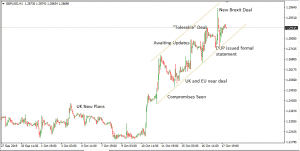 The days ahead will be a crucial turning point for Brexit and we expect Sterling and Euro pairs to remain highly volatile as the week comes to an end with potential for market gaps in the open on Monday following the special meeting on Saturday.

The earnings season is well under-way and had a solid start with bank earnings beating estimates which helped global stocks to edge higher as the geopolitical risks have tamed down a little this week. 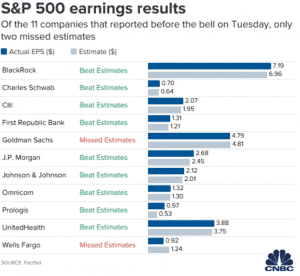 However, the risk environment remains fragile and earnings reports are quite short-term which will force investors to monitor the economic risks and backdrop. The S&P500 which is the most commonly used benchmark for determining the state of the overall economy struggled to push towards all-time highs. 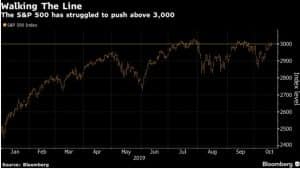 The renewed optimism triggered by the mini-trade arrangement was short-lived. Even though investors are aware that a trade deal in stages is a step forward for both countries, Phase 1 could just be forced on the US and China amid global growth concerns.

A comprehensive deal is still very far from conclusive and is difficult for investors and businesses to navigate through the uncertainties of the situation. A mini-deal does not resolve the structural differences and still leave them exposed to long-term tariffs and the possibility of further escalation of a trade war at any point in time.

The deal is vague and the lack of details did little to reassure the markets. However, the negotiations are still seen as a forward step in the right direction.

US Retail Sales data spooked investors as it has contracted for the first time in seven months. Consumer spending has been the main pillar for the US economy and the contraction can signal the consumers are pausing. 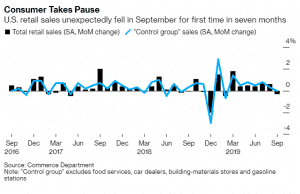 There were enough developments to reassess the current dominant geopolitical risks and the global economic outlook. While we have seen broad optimism across the board, the environment remains fragile due to the lack of concrete or significant developments.