It was another week of geopolitics amid a light economic calendar. Even though Brexit-related news dominated headlines, investors were also busy with the earnings season.

The wave of optimism from the past few weeks has faded this week as Brexit has reached another deadlock phase. The uncertainties and confusion around Brexit have kept investors on edge.

After a disappointing Super Saturday, the UK Speaker blocked a vote to hold a “yes” or “no” vote on the Brexit deal on the basis that the process will be repetitive and disorderly.

In anticipation of the European leader granting a three-month delay, the UK Prime Minister, Boris Johnson has demanded Parliament to approve a pre-Christmas election in a vote due next Monday.

Without any doubt, the British Pound has been on a roller coaster ride across the week. Brexit headlines are roiling the markets and denting sentiment. The GBPUSD pair broke out of the bullish channel and is currently trading in the vicinity of 1.28 level.

Investors have initially braced for subdued earnings for the third quarter due to the global growth concerns and the ongoing trade war. However, earnings reports have mostly exceeded expectations so far.

Even though better-than-expected earnings reports lifted sentiment, the fact that companies have slashed their profit outlook has kept a lid on gains. Tariffs continue to be a major concern for companies. Major US equity indices are struggling to rise firmly to the upside.

The benchmark S&P500 stock index rose above a key psychological level of $3,000 and is trading near its record high buoyed by earnings and positive trade headlines. The index is facing resistance around those levels. 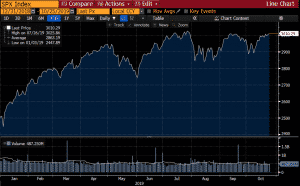 The start of the week was dominated by the Canadian elections. After a tight campaign marred by last-minute scandals, Justin Trudeau managed to secure another term but with a minority government.

The Loonie has been on an upswing this year driven by strong economic data. It is currently the best performing G10 currencies against the greenback. The Canadian dollar traded near three-month high against its counterpart on the Liberals win.

Investors are now eyeing the prospects of growth-boosting fiscal policies and a resilient economy which could translate in further rate divergence between Canada and its US counterpart.

The two main drivers of the oil market this week were the surprise fall in global oil stockpiles and the news that OPEC is considering larger production cuts. Those bullish factors from the supply side helped traders to push oil prices higher.

As of writing, the WTI and Brent Crude are currently trading at $55 and $61 respectively.

As the week comes to an end, the lack of positive developments on Brexit has allowed the yellow metal to receive some haven bids. The XAUUSD pair rose above a key level of $1,500 and is currently trading at $1,502. 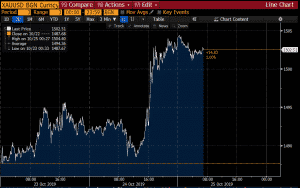 The Libra hearing which saw Mark Zuckerberg facing heavy criticism and hostile questioning from US legislators was a heavy blow for the cryptocurrency market. Bitcoin plummeted below $7,500 before going into a consolidation phase. 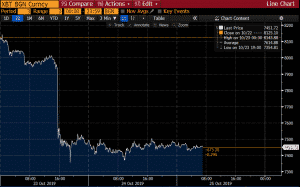 Disclaimer: Articles and videos from GO Markets analysts are based on their independent analysis. Views expressed are of their own and of a ‘general’ nature. Advice (if any) are not based on the reader’s personal objectives, financial situation or needs.  Readers should, therefore, consider how appropriate the advice (if any) is to their objectives, financial situation and needs, before acting on the advice. For more information of trading, check out our currency trading courses.

Next: Week Ahead – A Massive Week Ahead
Previous: Weekly Summary: Brexit: Regulatory Border In The Irish Sea