Weekly Summary:  The Epicentre Moves to the West

The Epicentre Moves to the West

Global activities have slowed in an abrupt matter due to an unprecedented health crisis. The virus has changed how the world operates and investors are adjusting to a “new normal” in the financial markets.

The Novel Coronavirus – From East to West

As of writing, the total number of coronavirus cases have reached more than one million while the death toll is currently more than 52,000 across the globe. Some countries are seeing the rate of the new cases dropping, but there are still fears that the various forms of lockdowns will be more severe over the weeks.

The epicentre of the virus has shifted to the West due to the initial complacency of western countries. Germany, Spain, Italy and the United States have surpassed China in both new coronavirus cases and deaths.

Investors are bracing for another brutal quarter after a horrific first quarter. Global equities swung between losses and gains this week as investors are digesting the emerging uncertainty around the virus and the alarming signals of a looming recession.

Given that Europe and the US have experienced a significant increase in the number of cases, the Asian markets are seen to be flaring better than the European and US markets as they initially seemed to have the pandemic under control. However, Asia is facing the risk of the virus coming back with returned citizens. 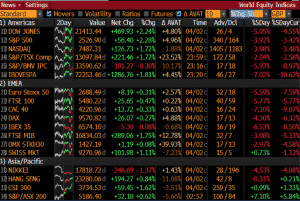 Investors welcomed some good news on Thursday as President Trump instilled hopes of a Russia/Saudi pact. Major equity indices had a breather on Thursday and ended in the green. On Friday, Asian stocks were expected to feed off from the optimism driven by the oil truce. However, the US futures slip lower reiterating the fragile risk sentiment prevailing in the stock market. As of writing, Asian stocks were poised to finish the day on a mixed note. 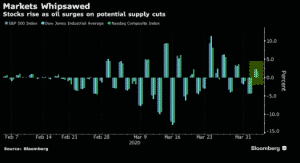 Quantitative easing, emergency rate cuts, and rescue packages are cushioning the freefall in the stock market, but the real indicator of stability is when there will be signs that the virus has peaked.

Amid a busy calendar, two notable events stood out:

China PMI figures: Both NBS and Caixin surveys show that manufacturing activities rose back in expansionary levels. At this rate, the reports also show that China’s manufacturing industry is recovering better than its peers. 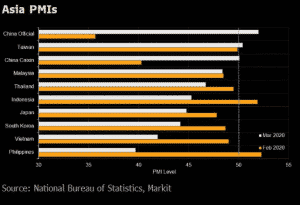 The rebound is not yet a done deal. As per the NBS manufacturing report, Production and New Orders both rose above 50 while the Caixin report shows a drop in New Orders despite the expansion of the manufacturing output.

After deteriorating at the quickest pace on record in February, operating conditions have stabilised in March, but it is best to wait for April figures to form the perception that the 50 expansionary level has the potential to be more sustainable.

US Jobless Claims: In the week ending March 28, jobless claims jumped by 6,648,000 which is an increase of 3,341,000 from the previous week. The various forms of lockdowns mean that a majority of the US population is staying at home. The number of jobless claims is far from over. The labour market which is the strongest sector of the US economy may be poised for a job market crisis.

The yellow metal was firmer this week and is currently trading above the $1,600 mark. Despite a stronger US dollar, a combination of positive fundamentals driven by increased demand and supply disruptions, and rescue packages is still creating a positive environment for the precious metal.

In the near term, the precious metal might face another round of liquidation if investors resume the rush for cash. However, as long as investors are reassured that there are enough liquidity injections in the markets, they will seek safety with traditional haven assets like the gold. 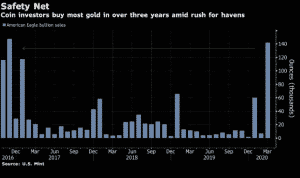 On the technical side, the spinning top candle on the monthly chart shows the indecisiveness in the gold market. Currently, at the top of an uptrend, it may signal that bulls are losing their control. Bulls and bears will wait for the next candle for confirmation of a significant trend change. 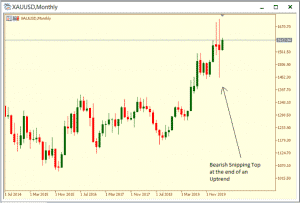 Oil Market- Hopes of a Truce

On Thursday, the US president tweeted the hopes of a pact between Russia and Saudi Arabia which resulted in crude oil prices soaring above 20%. The expectations of a major oil production cut helped WTI and Brent Crude to rebound from recent lows and to trade at a high of $27 and $31 respectively.

As of writing, the bid momentum has toned down and the WTI and Brent Crude was currently trading at $24 and $25 respectively. However, crude oil prices are still trapped in a bearish environment.

Oil traders will likely look for signs that will end or tone down the feud before pushing prices higher.

Major currencies were mostly weaker against the US dollar. To the exception of the Canadian dollar that has received a good boost from soaring oil prices, major currencies struggled to find a firm direction to the upside. The US dollar index reclaimed the 100 level as the increasing selling bias in other currencies continues to support the greenback.

Disclaimer: Articles and videos from GO Markets analysts are based on their independent analysis. Views expressed are of their own and of a ‘general’ nature. Advice (if any) are not based on the reader’s personal objectives, financial situation or needs.  Readers should, therefore, consider how appropriate the advice (if any) is to their objectives, financial situation and needs, before acting on the advice. For more information on trading, check out our CFD trading courses.