Weekly Summary: The World and Its Various Forms of Lockdown

The World and Its Various Forms of Lockdown

It was an unusual busy week where investors were struggling to keep up with various forms of lockdown around the world. The pause in global activity is reviving recession fears which are prompting market participants to closely monitor whether the intervention measures of governments and central bankers would be enough to stem the turmoil in the markets.

The world is facing an unprecedented health crisis which is forcing countries to close their borders and curb travels. This week we saw various forms of lockdown. The number of deaths in Italy is now more than in China. Countries are now rushing to implement more stringent actions to limit the widespread.

Investors were navigating thin liquidity and high volatility environment not seen in years. Faced by a liquidity crisis, major countries made emergency liquidity interventions in the markets this week.

The sell-off button was triggered across all markets and even Gold which is a traditional safe-haven was not spared. The precious metal is being liquidated as investors are seeking cash to meet liquidity requirements or margin calls.

The XAUUSD pair erased all the gains made since the beginning of the year but remained around the elevated levels seen in 2019. Being a highly liquid asset, it is not uncommon for gold to act as a source of liquidity at the start of a liquidity crisis. 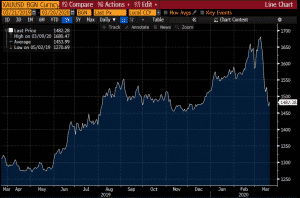 As investors are convinced that central banks’ intervention like rate cuts and quantitative easing will inject enough liquidity in the financial markets, Gold will likely find buyers.

As fears of a global recession intensify, major central banks announced big stimulus packages to shore their economy. Rate cuts are no longer moving markets but a range of quantitative easing is being deployed to tackle the global shift in the markets.

The Trump administration is also trying to provide another bigger stimulus package. The Third phase is reportedly a multi-billion stimulus package which will also include the Treasury recommendations of billions of dollars in direct payments to Americans.

In Australia, the government intends to roll out its second stimulus package which will mostly consist of wage and rental relief for businesses and cash for affected workers. The RBA has also cut interest rates for the second time in a month to a new record at 0.5% on Thursday.

As we await to see if major Australian banks will pass the full rate cut, CBA was among the first to announce that the rate cut will not be applied to standard variable rates but mostly to some small business pans and two and three-year fixed home loan rates.

Europe which is now the epicentre of the outbreak failed to act early to prevent the widespread of the virus across the bloc. Among its peers, the Eurozone economy could be among the hardest hit in 2020. The ECB announced on Wednesday that they will spend €750 billion in bond purchases to calm down the sovereign debt market.

“Extraordinary time requires extraordinary action” is the tone adopted by most central bankers and governments at the moment. The US stimulus package stood out among its peers which helped the US dollar to resume its haven status. In an unprecedented health crisis, which is reviving recession fears, investors are looking who is injecting more in the markets and supporting their economy.

The US economy is more likely poised for a U-shaped or V-shaped recovery post coronavirus crisis compared to its peers.

In the World of Currencies

In the FX market, the US dollar gathered strength against all the G10 currencies.

The US dollar index rose above the 103 level and experienced its best winning streak since the global financial crisis. The swift is significant and can have adverse effects on the freefall in the stock market. A stronger dollar could hurt companies and affect earnings. 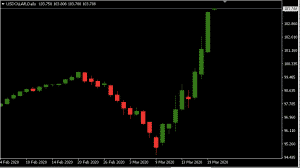 The Australian dollar plunged to an 18-year low against the greenback this week as the RBA slashed interest rate and start a bond-buying program on Thursday. The AUDUSD pair has bounced back since the plunge and appeared more resilient on Friday. 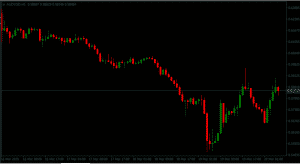 An oil price war floods the oil market at a time where the global activity has slowed dramatically. At the moment, there is no good news to cushion its fall. A simultaneous demand and supply shock are preventing oil prices from rebounding.

Baffled by a health epidemic, the US President conveyed its intentions to intervene at an “appropriate time” which provided a floor to the plunge in oil prices. However, the momentum may be momentary if traders are deprived of any developments in the coming days.

The two most popular grades of crude oil have fallen by more than 40% since the beginning of the month. As of writing, Brent Crude and WTI was slightly firmer at $30 and $27 respectively.

The world is closing its doors which is fuelling panic across the board. Market participants are in search of reassurances that the interventions in place will bring some stability to the financial markets post-coronavirus.

Disclaimer: Articles and videos from GO Markets analysts are based on their independent analysis. Views expressed are of their own and of a ‘general’ nature. Advice (if any) are not based on the reader’s personal objectives, financial situation or needs.  Readers should, therefore, consider how appropriate the advice (if any) is to their objectives, financial situation and needs, before acting on the advice. For more information of trading, check out our cfd trading courses.