It has been a tough year across equity markets in 2022. Most markets emerged from the Covid 19 pandemic with strong rebounds only to be hit with geopolitical conflicts and record high inflation levels.

The US indices had one of their worst years indices in history. With higher interest rates causing many of the country’s growth company’s and technology stocks to suffer some of the worst losses in years. These performances weighed down much of the returns across the major US markets. The Nasdaq was an extremely poor performer falling by 31.15%, its worst year since 2008 and the fourth worst year since its opened in 1986. Heading forward into the new year, whilst interest pressures and inflationary pressure may ease somewhat a recession and a slowing down of growth will be the next obstacle for the US markets to face.  One positive for the market could be a reopening of China’s economy as it works its way out of Covid. It may provide the soft landing that market participants are hoping for. 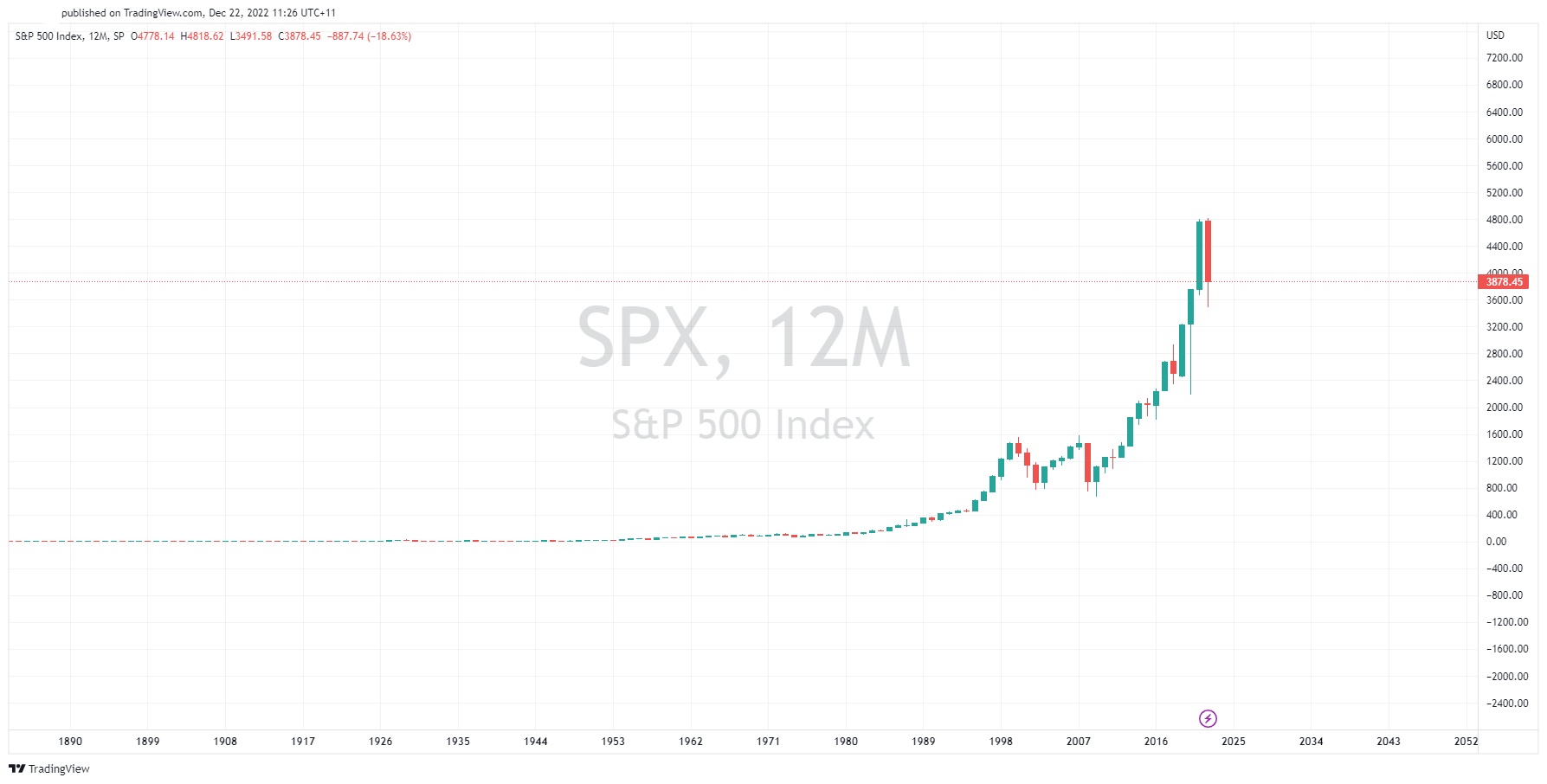 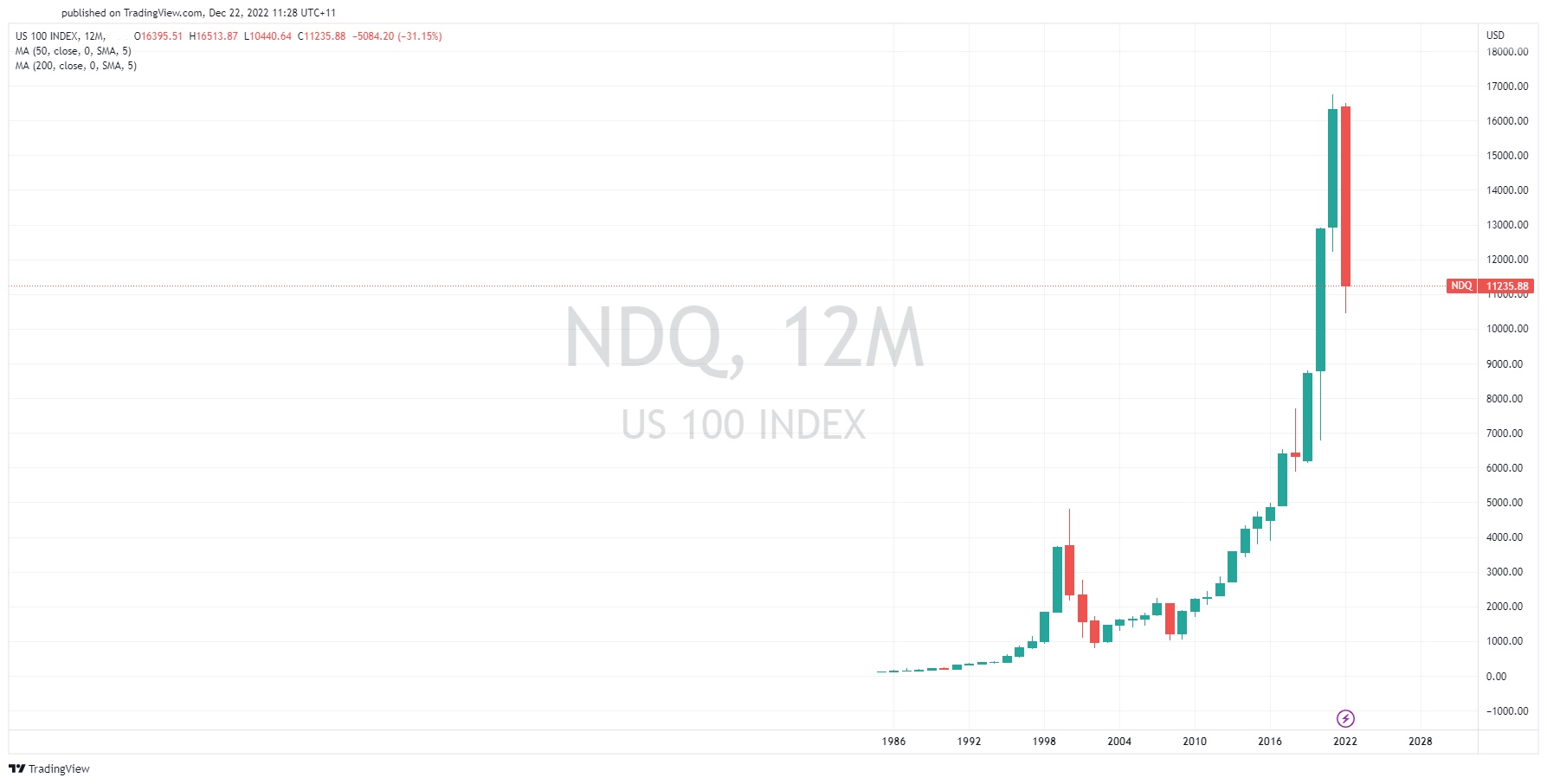 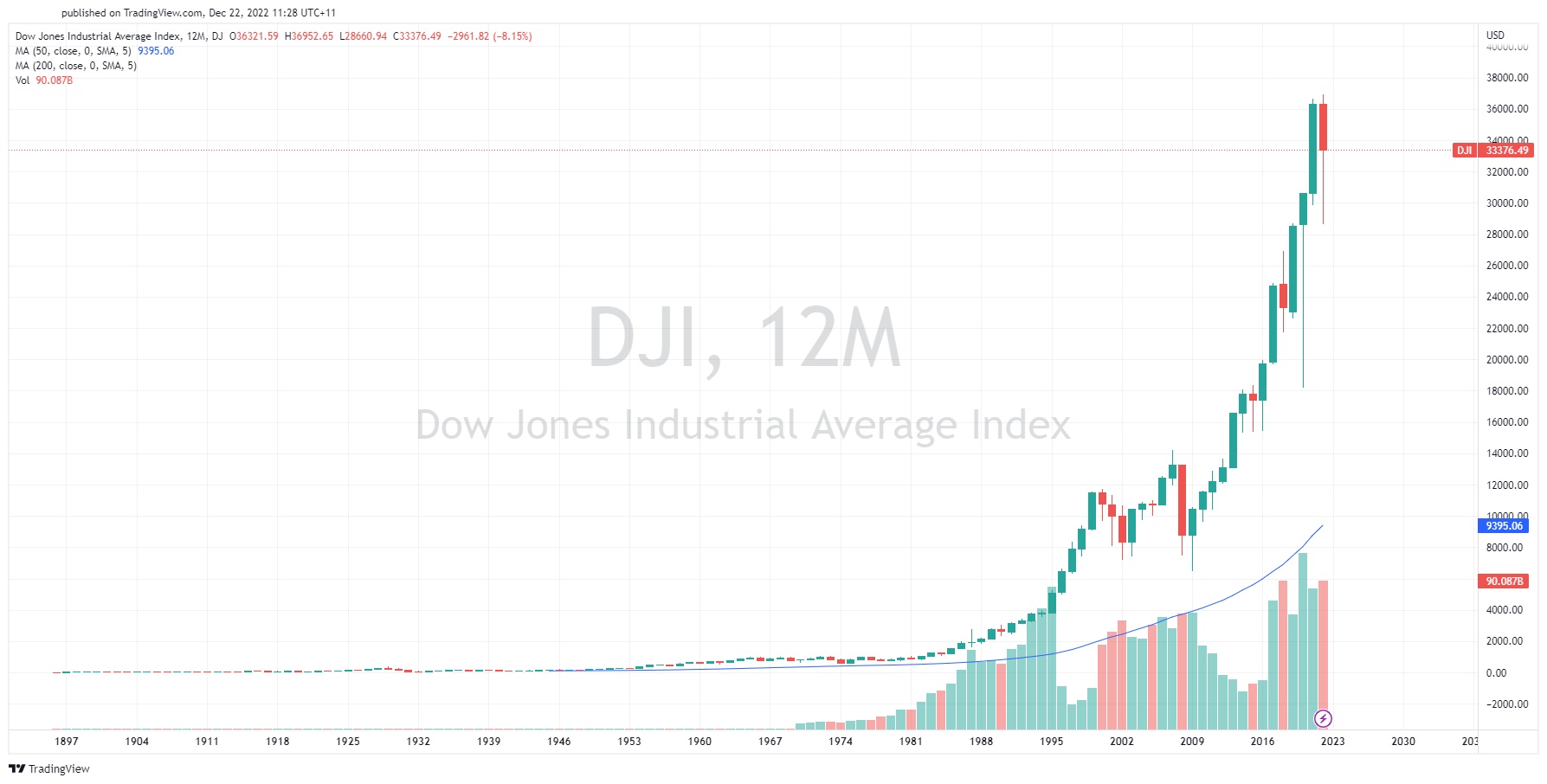 The ASX200 and FTSE were some of the strongest performing markets across the year. The ASX in particular showed great strength due its heavy weighting towards resources and energy. During the most volatile times this sector really held the Australian market up. On the other hand, although the UK was dealing with record high inflation and a tough political climate the market remained stable and actually finished in the green for the year. 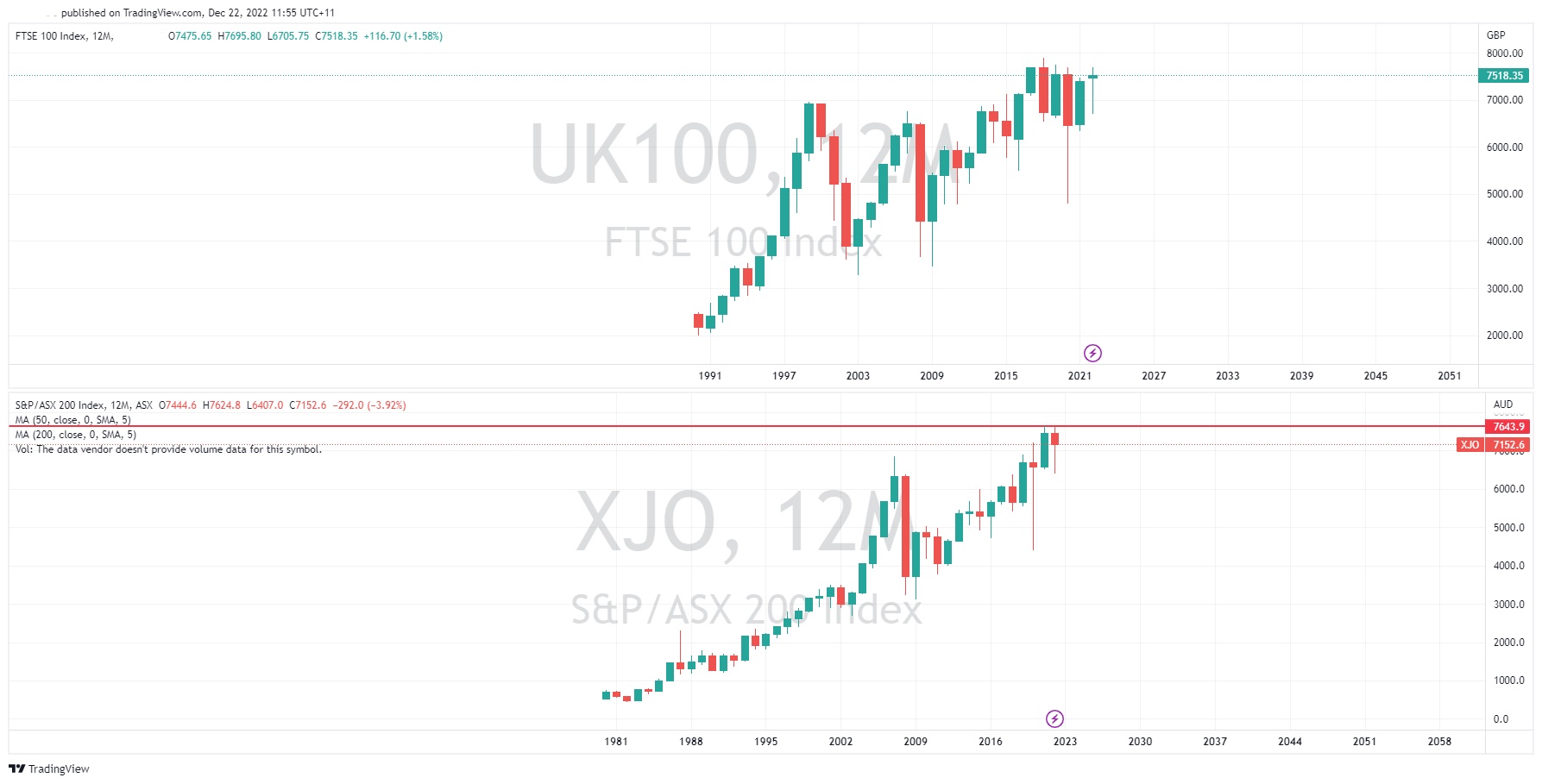 The FX market had some incredibly aggressive moves across the year. The USD in particular was a shining light in times of volatility and times of risk off. Capital flowed out of the EUR and the JPY for much of the year with both hitting record lows. With Europe being engulfed by war, the currency took a big hit. Although in recent weeks and months it has seen a recovery. With an aggressive recession it may face a tough battle in the near-term future. However, for the moment it does seem to be improving and this has largely been due to a weaker USD.

The USD has largely been a picture of strength throughout the year although has pulled backs somewhat towards the last few weeks of the year. The USD strength led to weak commodity prices and a weakness in many growth currencies such as the AUD and NZD. Similarly, with the Bank of Japan remaining dovish, the JPY also suffered some of its worst losses in decades. However, in the last week even the JPY has recovered after the BOJ adjusted its intervention bands. 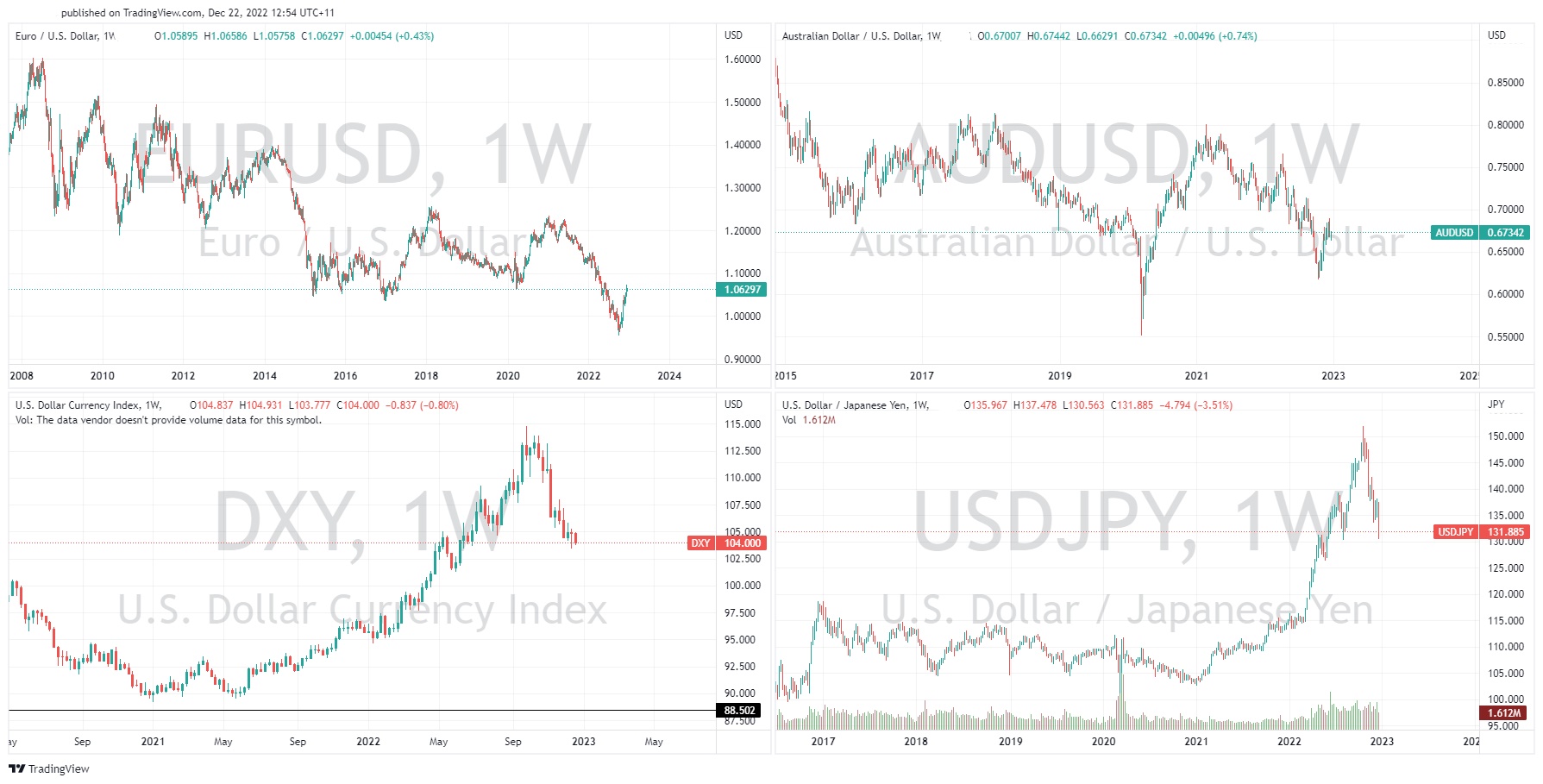 Bitcoin was one of the biggest news stories of the year. With the collapse of Celsius, FTX aggressive sell offs followed. With the fallout still to come the bottom is yet to be seen for Bitcoin. The price has already fallen from its peak of USD 68,000 to a current price near USD 16,500 a 75% drop in price in what was arguably the most disappointing performed asset. Going into 2023 with new regulations potentially to come and more news over the collapse of some of the large exchanges there may be more pain to come. 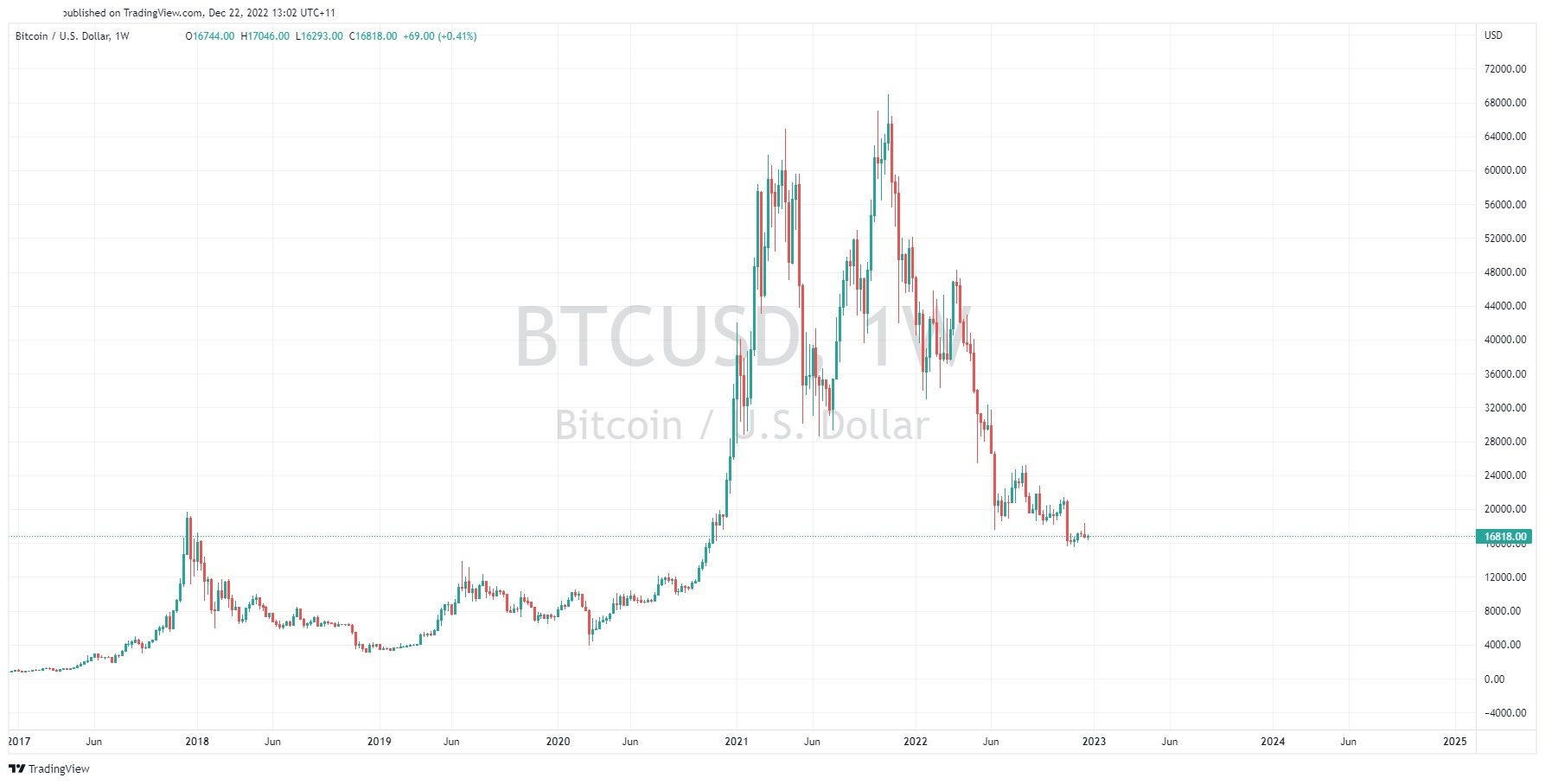 In the commodity market, the Russian and Ukraine war pushed up the prices of the major energy resources such as oil and natural gas to record high levels as the crisis created extreme volatility. however, as the dust settled the prices came back down. After Oil peaked at near $130 a barrel during peak inflation, the price fell by $50 from its peak towards a much more manageable $80. With the fear of slowing growth the price of oil may face a topsy Turvey 2023 as OPEC try and adjust their production to meet the required demand.

Gold had a much more stable year as it chopped around between $2000 and $1600. The price moved as it reacted to inflationary and geopolitical pressures. It is possible with more recessionary fears that gold will continue to provide a safer option for traders. 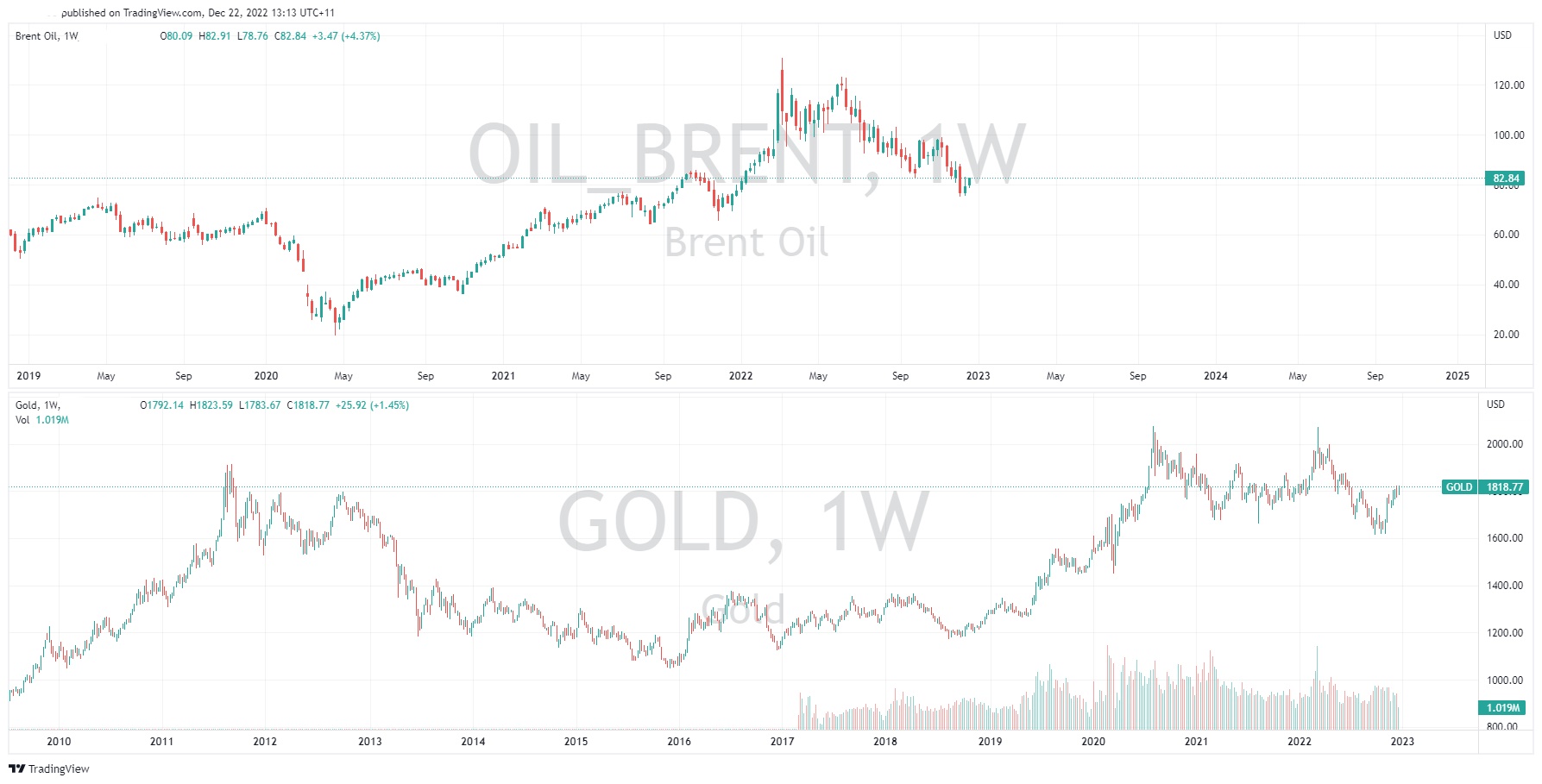 There is no doubt that 2022 provided a tough year for traders and investors. With a potential recession it is not expected in the short term to get much easier, although there should be some interest rate relief for debt holders. Ultimately, the market will continue to be volatile and provide trading opportunities long and short.

Week Ahead: Market shows early signs of reversal ahead of CPI

Market shows early signs of reversal ahead of CPI   The equities market began the 2023 calendar year with some late momentum as the US employment data came back softer than expected. Wage growth grew less then with a 0.3% rise vs a 0.4% expected rate. Although the unemployment rate continues to drop. The market took the overall figures a...

Why you need to understand this market concept to improve your trading: Market Correlation

Why you need to understand this market concept to improve your trading: Market Correlation For new traders and experienced traders, it can be daunt...