Gold and equities rally as Cryptos crash and Dollar dips

After dipping early in the month as inflation fears resurfaced, markets bounced back to broadly rally, with US and Australian equity markets touching on all-time highs.

Major world indices rallied strongly in May. Gains were seen across the US, EU/UK, and Asia/pacific as central banks struck a mostly dovish tone and economic recovery continued from pandemic lows.

Equities wobbled in early May as higher than expected inflation figures spooked the market. Central Bank chiefs in the US and EU calmed the market, calling these elevated readings ‘transitory’ and reassuring investors easy money policies are not going anywhere for the time being.

May saw a mostly weaker US dollar as the majority of G10 currencies outperformed the greenback. GBP and CAD performed particularly well as the central banks of those two nations indicated a timeline to end emergency accommodative policies. NZD also played catch up later in the month, as the RBNZ joined their UK and Canadian counterparts in setting a timeline to exit QE policies.

The US dollar index continued its decline in May, despite a bump early in the month due to inflation fears caused by an elevated CPI reading.

The index dropped over 1% as the Federal Reserve dismissed inflation figures as ‘transitory’ and re-affirmed their easy money policies were here to stay until targets were met in the labour market. The Dollar index is trading at its important support level around the lows of 2021, where it’s found some support. 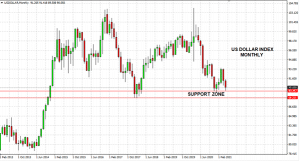 The Aussie dollar again tested its resistance zone above 0.78c US on strong economic figures and elevated iron ore prices. It again was rebuffed as heavy selling pushed it back down to the middle of its 2021 range. The RBA faces mounting pressure around announcing tapering of its bond purchase program.  Rising sentiments in business conditions and confidence will have them fast approaching a decision whether to join Canada and New Zealand in signaling an end to emergency measures. 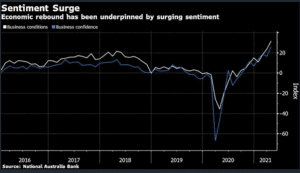 Gold prices rallied strongly in May and XUAUSD has now recovered more than $220 per ounce since the bottom at the start of April, and is fast approaching its 2021 high set in January.

May saw a perfect environment for gold as its two traditional drivers came into play. A hedge against inflation and a flight to safety, it was also helped along by a weak US dollar. Analysts are citing $1950 per ounce as the level to watch as traders digest lower-than-expected US economic data along with higher inflation numbers. 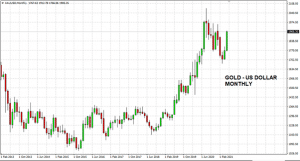 The Crypto complex had an extremely volatile month with seemingly endless negative headlines weighing heavily on the Bitcoin price, and by extension most other altcoins as well.

BTCUSD dropped over 50% during May as everyone from Elon Musk to the Pope seemed to have something negative to say about the cryptocurrency. 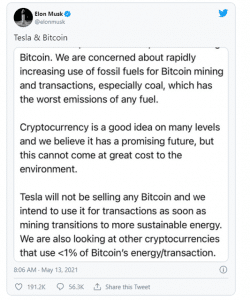 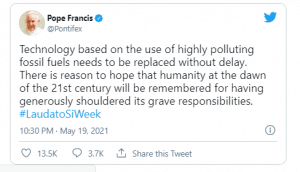 BTCUSD did find support though at around the $30k USD level and bounced strongly to hold levels around $35k. With the weak hands now seemingly shaken out, the week ahead will be an important indicator on the viability of Cryptos being taken seriously as a financial asset in the near term. 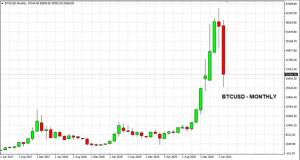 Overnight on Wall Street: Wednesday 26 May 2021