Five days on from the start of the invasion, we have already seen countries around the world condemn Russia’s actions and announce tough sanctions against the largest country in the world. None of those have yet made any difference to their actions, as they continue their invasion.

However, their actions have already impacted their economy – and it will most likely get worse.

Swift action from the West

Over the weekend, the United States, European Union, United Kingdom and other countries agreed to remove a number of Russian banks from The Society for Worldwide Interbank Financial Telecommunication (SWIFT) system, an international payment system which is used by financial institutions around the world.

“We commit to ensuring that selected Russian banks are removed from the SWIFT messaging system. This will ensure that these banks are disconnected from the international financial system and harm their ability to operate globally,” the European Commission said in a statement following the announcement.

The latest move will have a drastic impact on the Russian economy, which is the 11th largest in the world according to the World Bank data.

It is worth pointing out that only one other country has ever been cut off from the SWIFT system – Iran. The move resulted in Iran losing half of its oil export revenues and 30% of foreign trade.

On Monday, the Bank of Russia announced its key interest rate from 9.5% to 20% to protect the Ruble, as the pressure mounts on the Russian economy following the latest round of sanctions.

”External conditions for the Russian economy have drastically changed. The increase of the key rate will ensure a rise in deposit rates to levels needed to compensate for the increased depreciation and inflation risks. This is needed to support financial and price stability and protect the savings of citizens from depreciation,” the Central Bank said in a statement on their website.

”Further key rate decisions will be made taking into account risks posed by external and domestic conditions and the reaction of financial markets, as well as actual and expected inflation movements relative to the target and economic developments over forecast period,” the statement continued.

The Central Bank of Russian Federation interest changes since July 2020 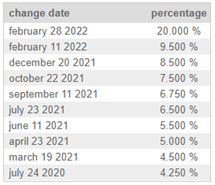 Last week we saw the Moscow stock exchange, the MOEX index, plummet by 45% – to a new record low. The index recovered some of the losses last Friday when it was up by 20%. 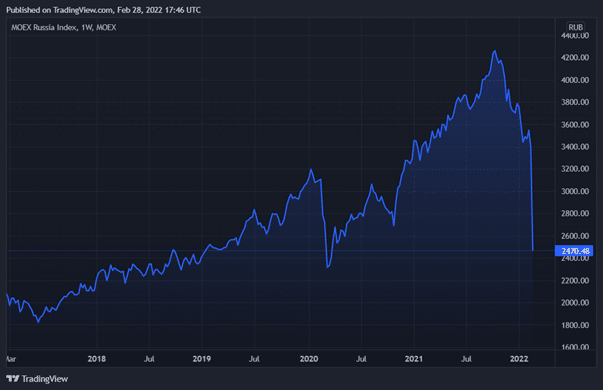 The Russian currency has been in free fall since the conflict began – reaching the lowest level ever against the US Dollar. US Dollar was trading at around 76 level at the beginning of February vs. the Russian Ruble. USD/RUB was trading 107.7000 level on Monday – up by around 27%. 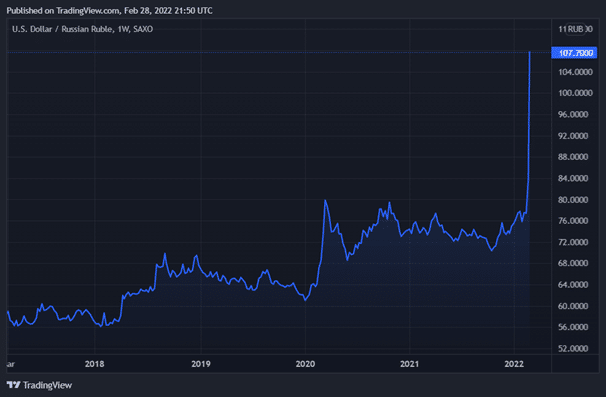 With the conflict showing no signs of getting resolved any time soon, we will most likely see more impact on the Russian and world economy in the coming weeks and months.

Zoom Video Communications Inc. (ZM) reported its fourth-quarter 2021 financial results after the closing bell over in the US on Monday. The US based company, which offers a cloud-based video conferencing service reported total revenue of $1.071 billion (up by 21% year-over-year), which was above analyst estimate of $1.054 billion. Earnings pe...

US and European equity markets remained volatile as fighting between Russian and Ukraine forces continued and negotiation talks failed to result in an...