Australian economy bounces back from recession

The Australian economy experienced its first recession in almost three decades having contracted for two consecutive quarters. Back in June, the economy slumped by 7% and encountered the worst fall on record. As other global economies, Australia was heavily impacted by an unprecedented raging pandemic. The fall in the June quarter was driven by private demand, which detracted 7.9 percentage points from GDP. The record fall in household consumption (-12.1%), accounted for over 95% of the fall in GDP. 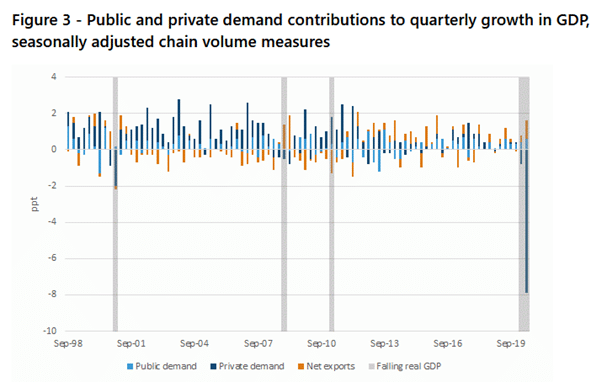 As COVID-19 related restrictions eased across most states and territories to the exception of Melbourne which is Australia’s the second most-populated and largest city, the Australian economy emerged from a recession and rose 3.3% in September quarter. The GDP figures came above expectations of a 2.5% growth. Given the havoc created by the pandemic, the level of economic activity remains low and GDP has declined by 3.8% in the year to September 2020. 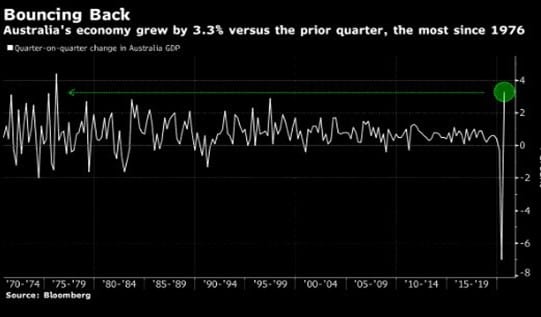 However, given that Melbourne which was the only state to record a fall driven by declines in household spending and investment has now eased restrictions, policymakers are expecting the economy to continue to grow in the fourth quarter, unlike some other major economies which are still battling a second wave of the outbreak.

After rising at the open, the ASX200 fell into negative territory into lunchtime with most sectors in the red while gains were seen in the materials and industrial sectors. As of writing, the index was trading relatively flat at 6,587.20 points.

While major currency pairs remained in familiar levels during the Asian session, the Aussie dollar is leading among the G10 currencies against the US dollar on the back of upbeat GDP figures. The additional funding from the central banks, governments, renewed confidence, and economic data have helped the Australian dollar to perform better than its peers.

The AUDUSD pair rose to a session high of 0.7389 just below a key psychological level of 0.74 before retreating slightly lower.

EURGBP - 4HR EURGBP - Pound Sterling hit hard during today's London session as senior EU diplomats suggested significant barriers still exist around trade deal negotiations. The unfavorable news sent the cross rallying to a three and a half week high of 0.9084. Coinciding with these three weeks is how well EURGBP has tracked the 200 MA (Blue li...