2019 in a Nutshell and the Transition to a New Decade

If we could describe the year 2019 in one word, we believe uncertainty says it all. The world entered 2019 with a high level of ambiguity and is poised to finish the year with the same extent of uncertainties. The Global Economic Policy Uncertainty Index which is a GDP-weighted average of national EPU indices for 20 countries has remained in elevated levels in 2019.

Each national EPU index reflects the relative frequency of own-country newspaper articles that contain a trio of terms pertaining to the:

In simple words, the frequency at which newspapers cite “uncertainty” in relation to economic policy is high. 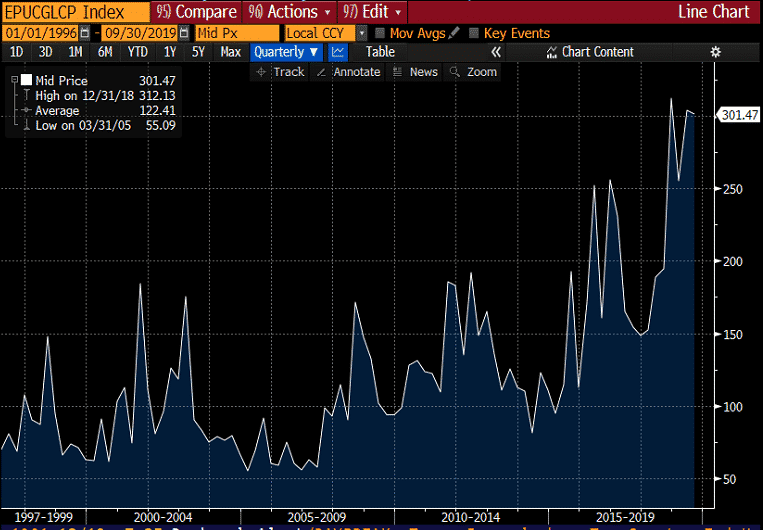 We have seen a de-escalation of trade tensions between the world’s two largest economies towards the end of the year. Investors grew hopeful that both countries will sign a partial trade deal. After weeks of speculations regarding the partial trade deal, “ a deal in principle” made headlines driving major US equity benchmarks to new highs. The optimistic statements in the US were not reciprocated to the same extent in China. It was a much muted and cautious response.

Any commitment and compliance from China remain murky.

The Trade Truce is being handed over to the financial markets like a Christmas gift. The real surprise will be unwrapping the gift and taking note of the details of the agreement. At the moment, vague promises and speculations are creating a “fragile” positive environment.

Uncertainties Persist! Phase One will ease but not eliminate uncertainties as Phase Two will handle challenging issues such as IT, Artificial Intelligence and cybersecurity and other hi-tech areas.

At CNBC’s Hadley Gamble at the Doha Forum, US Treasury Secretary Steven Mnuchin’s comments on Phase two was not inspiring:

The growing prospect of populism comes with an array of uncertainties which is hard to ignore. President Trump’s presidency and Brexit are the bellwether of populism and have played a significant role in the recent volatility in the markets.

The Western political space is changing and is disrupting globalisation. The US President adopted a hard-line approach on not just trade, but also on migration and capital flows. The US has launched a trade war against major countries, some of which have been key allies of the US.

Brexit  Europe and the United Kingdom are practically on hold due to Brexit. The echoes of populism have threatened the existence of the bloc and have crippled its economy. Following the referendum for the UK to leave the European Union, the bloc’s members like Germany, Italy and France were also hit by several anti-establishment groups. 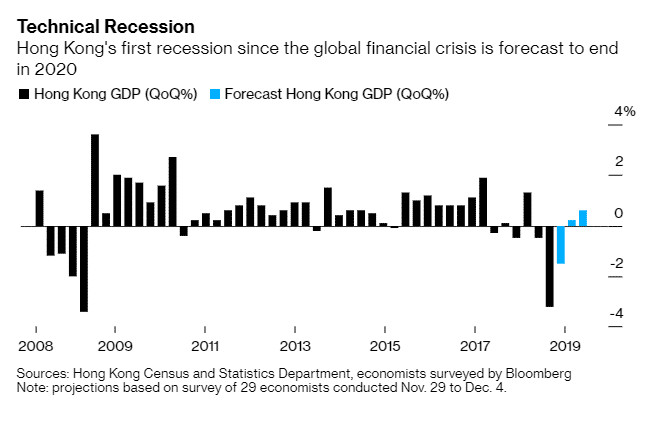 The manufacturing sector has been one of the main factors that had triggered concerns of a recession. In the US, the two widely- used indicators of the performance of the manufacturing industry are ISM and IHS Markit.

Both surveys consist of a diffusion that summarises whether the market conditions are expanding, staying the same, or contracting. Over the months, investors received mixed signals from both surveys. The divergence could partially be explained by the differences in the methodology used. Yet, the contrasting signals were noteworthy for investors.

As the year draws to an end, the preliminary Markit Manufacturing PMI figures for the US shows that it will be another month of steady growth fuelling hopes of a brighter start for 2020. On the other side, the ISM shows that the manufacturing industry has been softening for the past eight months and contracted for the fourth straight months at a faster rate. 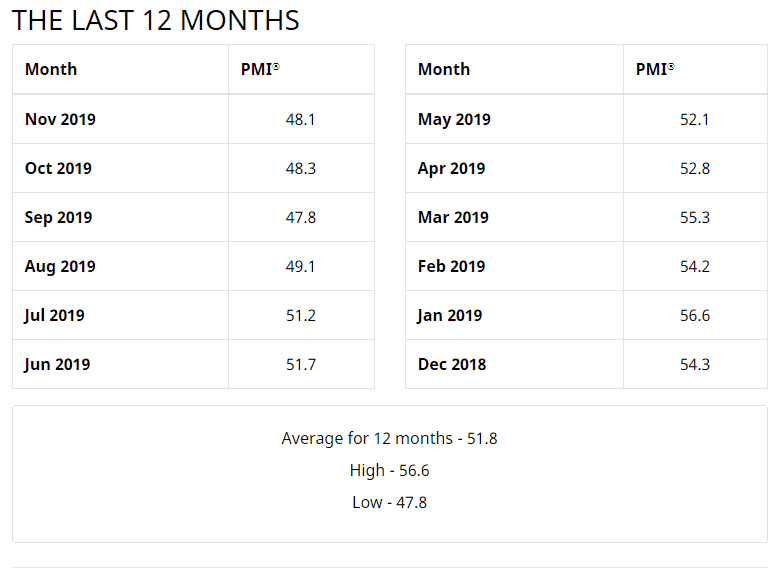 Towards the end of the year, the concerns of slowing global growth have receded as global economic data has shown some signs that the downturn may be bottoming out. Central banks have paused the easing policies and appear less dovish when setting policies for 2020.

A look at the performance of major global equity indices does not reflect the angst seen during the year. As of writing, the stock market is set to close the year on a strong note.

Chinese stocks have recovered strongly over the month. Despite a trade war, sanctions against public tech companies and slower economic growth, Chinese shares rallied. buoyed mainly by renewed optimism on the trade front.

Hong Kong Shares took a beating as months of protests have discouraged investment and compromised the country’s position as a financial hub. The US has also passed the bipartisan Hong Kong Human Rights and Democracy Act that could strip the city of its special trading status following annual reviews of its democratic freedoms. As of writing, the Hang Seng index was up by only 7%.

FTSE100 was primarily driven by Brexit-related events. Towards the end of the year, the index has been trading sideways, but the majority win by the Conservative Party has pushed UK stocks higher. However, the possibility of a hard-Brexit has tamed the rally. 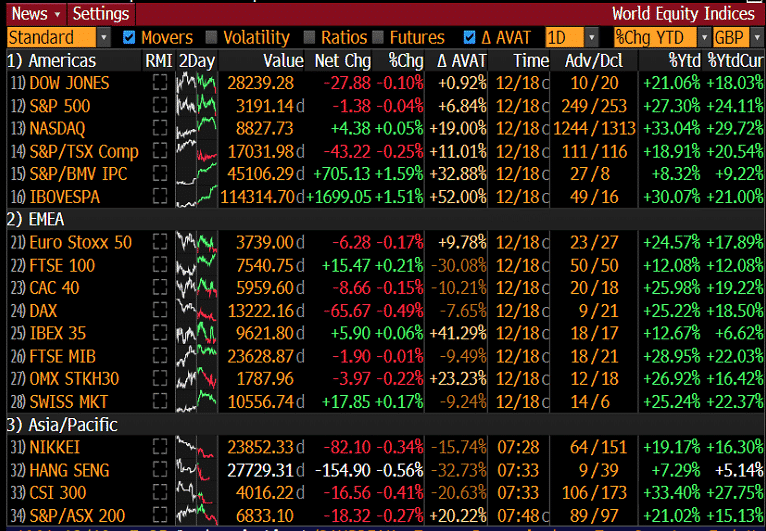 As the year comes to an end, we are seeing the dominant risks – trade and Brexit that have rattled the markets over the months moving in a positive direction.

The energy landscape is changing over the increased concerns on climate change. The rise of renewables is altering the dynamics of the industry.  The “Greta effect” and various extreme weather conditions are constant reminders that the climate crisis is not going away and governments will be forced to adjust policies to tackle climate change.

As we move into a new decade, we see that the energy sector has been left behind. Looking at the different sector of the S&P500, energy emerged as the worst performer. 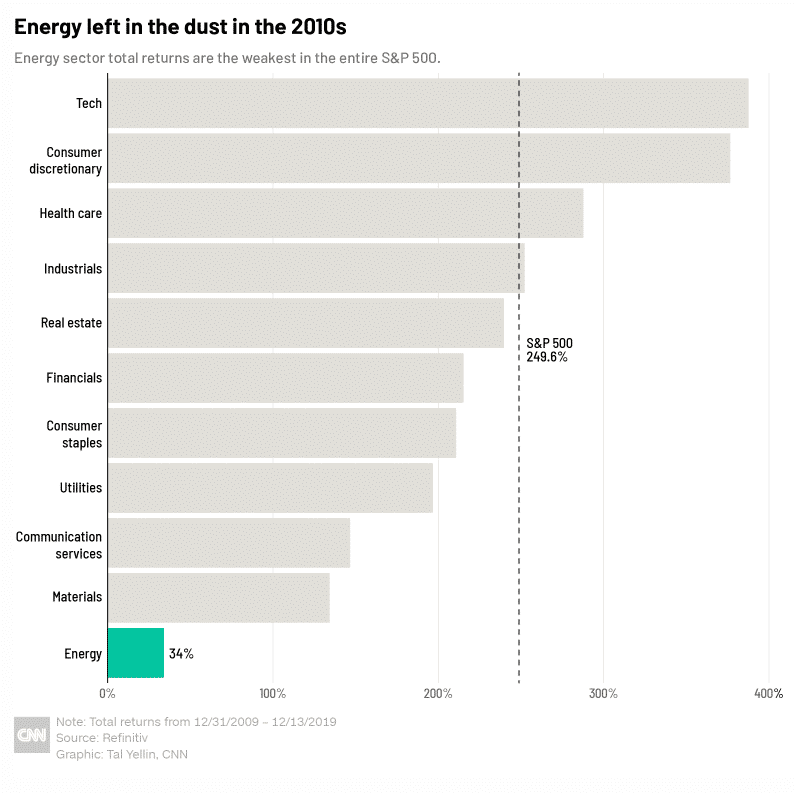 The oil and gas industry is facing a supply glut and decreasing demand at the same time. Saudi Aramco’s IPO which is one of the biggest IPO was launched as a local affair reiterating the struggle to entice international investors at a time where the oil market is facing structural headwinds.

The deeper production cuts by the OPEC members and allies and less geopolitical tensions are currently supporting a fragile oil market.

Investors are navigating in an environment with historically high levels of policy uncertainty. As we step into a new decade, market participants will be familiar with:

2020 is probably not the year for a recession. In the last two months, investors have priced-out recessions risks. The optimism is mostly based on positive trade-related comments, central banks intervention and expectations of steady interest rate in 2020.

GO Markets was established in Australia in 2006 as a provider of online CFD trading services. For over a decade we have positioned ourselves as a firmly trusted and leading global regulated CFD provider. Traders can access more than 250 tradeable CFD instruments including Forex, Shares, Indices and Commodities.

We have discussed many times the importance of unambiguous, and sufficiently specific statements within your trading plan in previous articles and at the weekly “Inner Circle” webinars (for more information see the Inner Circle in the navigation bar). The benefits of this are twofold: 1. Assist in developing consistency in executi...

At the recent GO Markets Daryl Guppy seminar, we had a presentation from Daryl that covered both an insightful economic outlook as well as s...