We are four months into 2016 and the global economic prospects are still uncertain.

The International Monetary Fund (IMF) chief has just issued another warning in recent days, stating that the outlook for global growth is weak and has encouraged policy makers across the world to work together to “bolster confidence, support growth, and guard more effectively against the risk of a derailed recovery”.

According to the IMF, lower consumer-led expenditure and governments that are less likely to use fiscal facets to support the economy, coupled with high levels of public debt (which are now the highest since World War 2) are creating a prolonged low-growth environment that can have very serious socio-economic implications.

Most of the developed nations have already embarked on a negative interest rates policy to address the low economic growth. However, as evidenced by this warning, their efforts have not yet been successful and markets and economies are still facing many uncertainties. 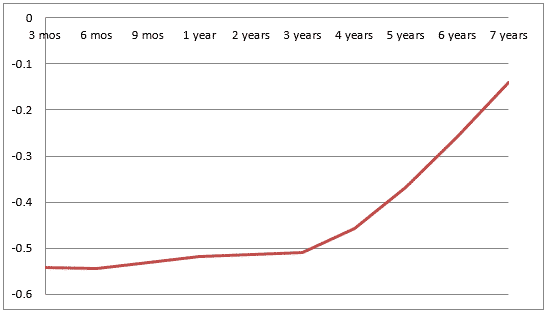 Although sluggish growth and negative interest rates are not pleasing for the majority of fund managers and pensioners, certain drivers and trends can potentially create opportunities to the benefit of traders. Below is an overview of some of these drivers and their follow-on impact on the Japanese Yen, ASX200, gold and the Aussie dollar.

Please note that these are our analysis of the market environment. They are not trade recommendations and you should have your own risk management strategy in place when trading the markets.

1) Opportunities and challenges in the banking sector

All traders, whether equity or FX, should always keep an eye on the banking sector because stress and pressure in this space can affect every tradeable security across the globe (remember GFC?).

The low growth environment has put banks under downward pressure from various sources. First, it has limited the amount of investment activities which has inherently meant lower revenues for banks which are the traditional providers of investment capital.

Second, it has made many banks deal with negative interest rates. Banks are not yet willing to pass the negative rates to their customers because they want to keep their market share and to discourage people from cashing in their deposits.

Therefore, negative rates have caused bank profits to shrink as the difference between interests they receive and the interest they pay has narrowed.

Third, the prolonged lower commodity prices resulting from slower demand from China and other emerging economies has pushed a number of mining and energy companies, which have had large debts, to the edge of bankruptcy. This is obviously bearish for banks as they have been the capital (loans) providers to these companies.

Although Australian banks don’t yet have to deal with prospects of negative rates, they have pretty much remained in synch with their overseas counterparts, thanks to the end of the mining boom and lower commodity prices and bankruptcies in the mining and energy sector.

For example, ANZ Bank has just announced that they will lose an extra $100 million in mining related bad debts. Furthermore, Aussie banks are quite vulnerable to the property market here in Australia.

Over the years, Australian banks have loaned out billions of dollars to property investors and therefore would have a lot to lose should the property market bubble burst.

From a trading perspective, deterioration in the banking sector can cause a chain of systematic risks which in turn may switch on a number of “risk off” trades.

Using the historical relationship between banks and asset markets, I have calculated that if the current downward trend in global and domestic banks accelerates and markets start to price in an additional weakness in this sector, some trading opportunities may arise in AUDUSD, AUDJPY, ASX 200 and Gold (In AUD).

The table below shows how much these assets may move should Australian banks drop by an extra 20% from here:

As you can see, ASX 200 index and AUDJPY traders may actually find meaningful medium-term trends should the banking sector start to deteriorate again.

At the moment, the pair has found solid resistance around 86.00 and deterioration in the banking sector can be a catalyst for this resistance to uphold and push the currency pair back to the 78 -79 band.

The U.S interest rate set by the Federal Reserve plays a significant role in any short and medium term trading. In response to continued low growth prospects and in the aftermath of the January and February volatilities, the once hawkish Fed which was singling 4 rate rises for this year, has stepped back and is currently signalling a rather softer tone towards rate rises.

The graph below (also known as the Dot Plot in the investment community) shows how the Fed governors were thinking about the 2016 economy (in terms of interest rates) both in Dec 2015 and March 2016.

The numbers on the left axis are the projected interest rates and the size of each circle shows the number of governors forecasting a particular rate.

However, since then, things have changed and the majority of Fed governors are now thinking we are more likely to be around 0.85% by the end of 2016.

Should the above dots keeps falling to the stage where U.S signals a possible rate cut and more importantly, a move towards negative interest rates, it will have some drastic impact on many tradeable securities.

If markets start to price in any chance of U.S rates going negative, the Aussie dollar will lose significant amounts to USD, JPY and gold. The details are in the table below:

Though I’m not predicting that the U.S rates will go negative, we are now living in an unchartered territory where everything seems to be possible.

If you talked about the likelihood of negative rates two years ago, most analysts would have laughed you out the door. But here we are today with most of the developed nations interest rates in the negative territory.

Therefore, I would closely monitor anything related to the US interest rates. 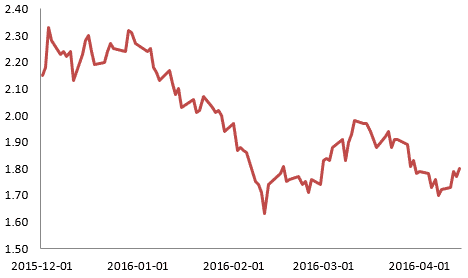 While analysts are scattered around the future direction of the US dollar itself due to Fed’s change of tone, the case of the USDJPY is relatively straightforward. It’s the world’s most traded safe haven currency and trends downwards each time there is another negative surprise or volatility in the markets.

In theory, USDJPY should have gone up when the Bank of Japan (BOJ) introduced negative interest rates earlier this year.

However, due to lack of investment opportunities brought by the low growth world and the fact that this pair acts as a barometer for global risk environment, it dropped by some 9.7% since the start of the year and brought short-term traders an abundance of trading opportunities (please refer to our previous article about this point).

At the moment, there is nothing that suggests the current economic conditions are going to disappear. It is possible that the existing downward trend USDJPY can in fact continue for as long as the Fed is not taking a serious stance on U.S interest rates.

The biggest risk to the above scenario is a possible BOJ market intervention. The stronger Yen (lower USDJPY) is negative for Japanese economy as it makes their products more expensive abroad.

Japan’s economy is highly export driven and higher Yen does not help. Therefore, at some stage BOJ may decide that enough is enough and start selling Yen in a large scale to push their currency lower.

But if history is of any guidance, BOJ’s probable intervention may only create additional shorting opportunity as these interventions have a poor record of effectiveness in changing the currency pair’s downward trends.

The opinions and information conveyed in the GO Markets newsletter are the views of the author and are not designed to constitute advice. Trading Forex and CFD’s is high risk.

Discover the key MT4 tips and tricks to make you a power user The MetaTrader 4 (MT4 Platform) is arguably the world’s most popular electronic trading platform used by retail FX traders and professional fund managers alike. It was first released by MetaQuotes Software in 2005, and GO Markets was the first Australian Forex broker to offer it to the...

Imagine having access to technical analysis across all the major markets, updated around the clock in real-time and of the same calibre that investmen...