US indices were down today as Jerome Powell indicated that the Federal Reserve is going to increase interest rates at a higher and faster rate than currently in place. US equities dropped after Powell’s speech. Ultimately the major indices ended relatively flat by the close of trading. The Nasdaq closed down 0.40% after taking a breather from its recent buying momentum. The Dow Jones was dragged down by Boeing after a 737-plane crash in the mountainous Guangxi region in China. The Boeing share price saw a 5.74% drop on the opening before recovering a little to close the day down by 3.60%. The S&P500 was also choppy as it reacted the Jerome Powell’s speech but finished flat.

The FTSE 100 showed gains as an uplift in commodities supported the index with oil spiking. This provided strength for the UK’s biggest oil companies BP and Shell with both rising by 3%.  The FTSE ended the day up 0.51% whilst the DAX was down 0.60%.

Brent Crude Oil made a powerful move overnight rising 7.91% to 116.33 USD. This came as European Union officials debated whether to place sanctions on Russia’s lucrative energy sector to pressure the country over its invasion of Ukraine. An embargo on Russian oil similar to what the USA and the UK have done may have drastic implications for the EU in which 40% of its gas is imported from Russia. Natural gas prices also continue to remain in the upper end of their recent price range.  Gold remains near its recent support levels ending the day at 1929 USD per ounce.

Bitcoin had a choppy day as BTC/USD ended flat overall. Ethereum was the better performer closing the day with a 1.87% rise. The ETH/USD continues to hold just below the $3000 resistance level.

The EUR/USD continued to be rejected at the $1.08 level after the speech from the Federal Reserve spurred USD strength. The AUD/USD has not been able to break through its recent highs of $0.74 as it proved a flat day for the pair after the previous day’s strong moves. The USD has continued its strong move against the JPY as it climbed another 0.27%. The JPY has continued to struggle against most other currencies. The GBP/JPY has closed in on its recent area of support 157.00-158.00 JPY as seen below as it looks to potentially break out. 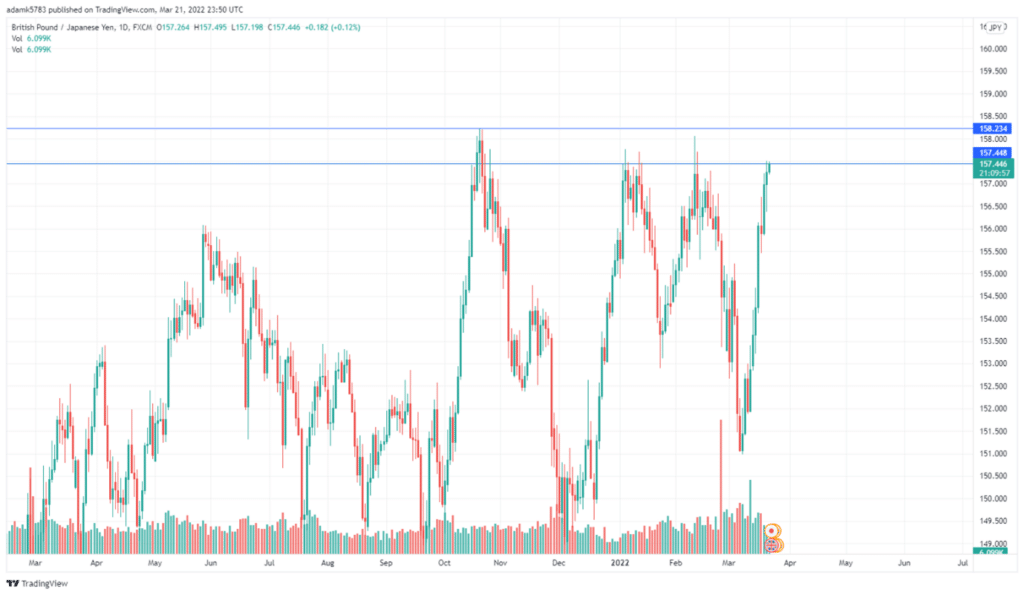 Blackrock has been slowly, consistently and quietly gathering assets across the globe. They are a multinational company whose main aim is to invest in...