The USA and other Western nations have intimated that they are planning to block Russia’s access to its international stockpile of gold. Russia has so far been able to use gold to support the Rubel as a tool to reduce the impact of sanctions. Russia has been able to trade gold assets for more liquid foreign exchange that have not been subject to current sanctions.

Tech stocks continued their momentum overnight as the Nasdaq closed at its highest level since February 9, up 1.93%. Intel was a top performer overnight as it rose 6.94% on reports that it may assist NVIDIA corporation in chip manufacturing. Uber also had a stellar night increasing by 4.96% after it reached an agreement to list NYC taxis on its app. The Dow Jones closed 1.02% higher as material stocks performed well. The S&P 500 reflected the positive momentum as it closed the day up 1.43%.

Brent Crude oil failed to carry on its rise as it dropped back 2.69% to $118.14. Although the price is still holding above the $115 level. The gold price saw a mini spike out of its consolidation as it jumped by 0.69% to USD 1957.41. The move can be somewhat attributed to the potential for new sanctions on Russia. Natural Gas had another bumper day as it rose by 5.81%. The price extended break out as it closed at its three-month highs of $5.464. The USA may be forced to increase its exports to Europe to offset any disruption in supply from Russia.

Bitcoin performed solidly overnight. It is currently testing the highs of its recent range and as the BTC/USD approaches the $46,000 resistance level. The pair closed at $44,091, a 2.56% increase, at 22.36 GMT. Ethereum has kept its strong week going with another 2.59% rise holding the $3118 at 22.42 GMT. The ETH/USD has seen a recent period of consolidation before overnight breaking above the trend line. 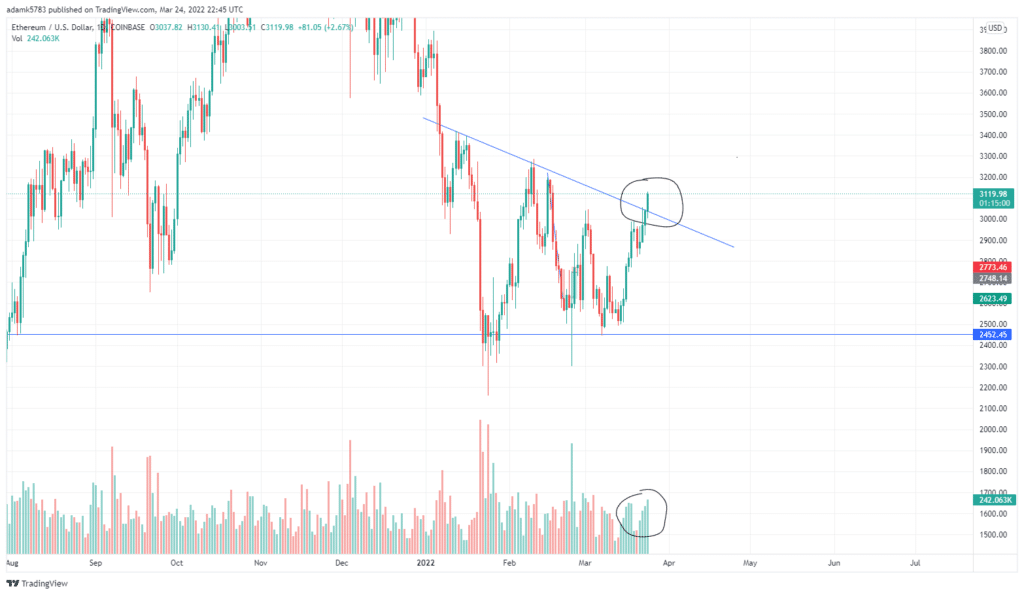 The JPY continues to be smashed against most other currencies. The USD/JPY rose by 0.97% to 122.324. The GBP/JPY also saw a huge move moving 0.88% to close at 161.330. The AUD/USD had a mixed day. Initially, the currency pair sold down, however it recovered later to close at 0.7512. The EUR/USD has seen a settling of its price as Ukraine and Russian conflict has settled. The pair finished trading at 1.0998 USD.

Premier Investments is a company that was established as an investment vehicle to maximise growth in capital returns to shareholders through the acquisition of controlling or strategic shareholdings in premier Australian companies, with a particular focus on retailing, importing and distributing. Premier Investments’ Half-Year Results Premi...