With just a few days to month’s end, the dynamics driving markets have changed compared to a few weeks ago. Risk sentiment was sliding under the influence of politics, mostly by the uncertainty around the US Presidential Election. More recently investors have breathed a sigh of relief on a series of positive vaccine updates, despite continued uncertainties.

The election mayhem and a probable contested election, the gridlock in Congress, another wave of lockdowns, Brexit and vaccines updates were the same predominant themes driving the stock market this month. Pfizer and BioNTech, Moderna and AstraZeneca issued statements of the progress of the vaccines trials boosting global equities:

They provided two main updates across the month. After announcing a 90% efficacy rate, they conduct the final efficacy analysis in their ongoing Phase 3 study, and their mRNA-based COVID-19 vaccine candidate met all the study’s primary efficacy endpoints. The analysis of the data indicates a vaccine efficacy rate of 95%.

The Phase 3 study met the statistical criteria with a vaccine efficacy of 94.5%.

The positive high-level results from an interim analysis of clinical trials of AZD1222 in the UK and Brazil showed the vaccine was highly effective in preventing COVID-19, the primary endpoint, and no hospitalisations or severe cases of the disease were reported in participants receiving the vaccine. There was a total of 131 COVID-19 cases in the interim analysis.

After the recent promising vaccine updates, investors shifted from high-flying tech stocks into cyclical stocks on the hopes of a quicker economic reopening than initially expected.

The US sharemarket is faced with a Joe Biden Presidency and a Republican Senate and the reassurance that there might not be a major shift in policies given the gridlocked Congress. However, investors remained cautious and wary given the uncertainties on the stimulus relief package and the ramping efforts of President Trump claiming fraud at the 2020 election.

In a pandemic-induced environment where the lack of timely fiscal support from the government is heavily impacting the economy and the level of confidence in the markets, the refusal of President Trump to coordinate transition efforts with President-elect Joe Biden adds another layer of uncertainty for markets. On the virus front, the US states have resumed lockdowns in an attempt to curb the spread of the outbreak following daily records of coronavirus cases and deaths.

Towards the end of the month, positive vaccine and political news have steered the US markets:

Pfizer and BioNTech SE submitted a request to the U.S. Food and Drug Administration (FDA) for Emergency Use Authorization (EUA) of their mRNA vaccine candidate, which will potentially enable the use of the vaccine in high-risk populations in the U.S. by the middle to end of December 2020.

They also announced their intention to roll submissions across the globe including in Australia, Canada, Europe, Japan and the U.K, and plan to submit applications immediately to other regulatory agencies around the world.

As per the announcement and Dr Moncef Slaoui, Americans could receive a COVID-19 vaccine as soon as the 11th of December.

The General Services Administration (GSA) which can ascertain the winner of a Presidential election based on certain criteria and govern under the law for presidential transitions, has recognised Joe Biden as the “apparent winner” and extended around $8 million in transition funding and making other resources available to the Biden transition team.

In addition to the transition funding, the state of Michigan officially certifies the election results for Joe Biden, fuelling hopes that there is a less chance of a contested election.

The Dow Jones Industrial Average, the blue-chip index topped 30,000 for the first time. It was another milestone for the US stock market amid the pandemic. 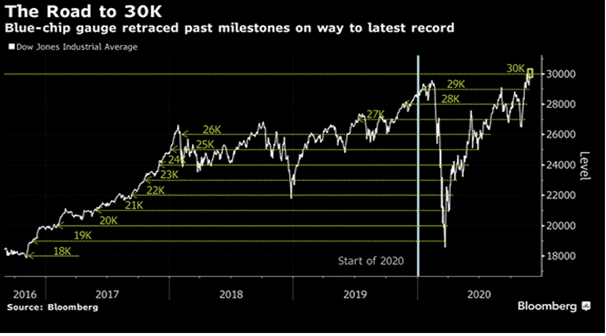 Another notable event was the announcements coming from Tesla and Amazon:

Tesla: The electric car maker announced it is set to join the S&P500 on December 21. The Company also received a trading upgrade to a buy-equivalent citing “the company on the verge of a profound shift” from Morgan Stanley after its debut declaration. The Company’s share price rallied following the announcement, highlighting the dominance of mega-cap growth stocks on the S&P500 benchmark.

Amazon: Amazon launches its online pharmacy – the Amazon Pharmacy earlier this month capturing the pharmacy business. It is a game-changer for the online retailer giant as it will allow customers to order medication or prescription refills to be delivered to their front door within days. Its emergence in the prescription drug space will definitely have some impact on drugstores. The share price of its rival companies CVS Health Corp, Wallgreens Boots Alliance Inc, Rite Aid and GoodRx took a blow on the launch.

The European markets were also underpinned by more national or localised lockdowns and Brexit negotiations. Even though the European Union appeared more optimistic around the negotiations with the UK, there is still much uncertainty around Brexit. The countries like France and Belgium are urging the EU to also step up preparations of a no-deal Brexit.

While investors welcomed the vaccine updates, the eurozone economy seems to be lagging compared to its peers. The latest PMI figures in the UK, US and Australia also indicated a strong recovery in the manufacturing and services sector while the Eurozone and Germany failed to recover as expected.

Like the other markets, encouraging vaccine news was the bullish trigger in the European markets.

ASX – back in black

After the release of the Federal Budget, Australian shares started to decouple from US and European stocks as investors endorsed the government blitz which boosted confidence. During the month of November, the Australian share market has rallied significantly on the back of: 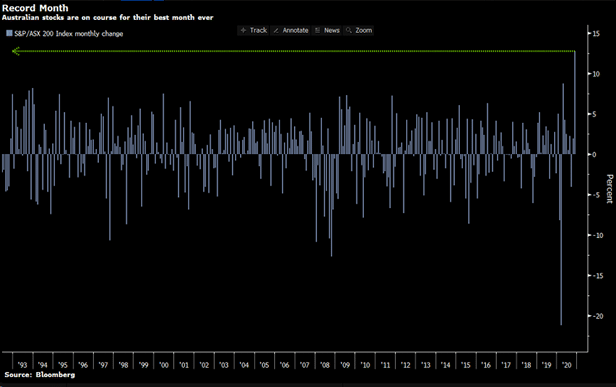 Earlier this week, the ASX briefly erased 2020 losses before retreating slightly lower as of writing.

In the forex market, major currencies were stronger against the US dollar. The greenback struggled against its peers following fresh daily records on the virus front, mixed economic data, a dovish central bank and a stimulus gridlock. Safe-haven currencies like the greenback, Japanese Yen and Swiss franc were among the worst performers as compared to commodity-related currencies and the British Pound.

The Antipodeans currencies were among the top gainers lifted by the better containment of the virus as compared to other major economies. The additional funding from the central banks, governments, renewed confidence, and economic data have helped the Australian and New Zealand dollar to edge higher.

As of writing, the AUDUSD pair is currently trading above the 0.73 level.

The GBPUSD pair reclaimed the 1.33 level following encouraging Brexit headlines and the overall broad optimism in the markets despite the national lockdown.

Crude oil prices have remained pressurised by the uncertainty on the demand outlook and a supply glut. The broad optimism in the markets triggered largely by vaccine updates and hopes that the pandemic may soon be under control, is providing support to a fundamentally battered energy market.

Gold plummeted below the psychological mark at $1,900 on the first announcement of Pfizer and BioNTech that its vaccine has a 90% efficacy rate. For the remaining on the month, the precious metal remained underpinned by vaccine trials news and the US stimulus gridlock. As of writing, the XAUUSD pair has dropped to its lowest point in four months and is currently trading around $1,810.

From the health crisis point of view, the vaccine updates are fuelling the hopes of a quicker recovery and providing reassurance to investors. However, the amount of stimulus injected into the global economy over the last couple of months is evidence that the economic and financial recovery might take some time.

Despite the recent sell-off, the precious metal is currently holding up above the $1,800 mark. Any breach below this level may trigger a deeper sell-off. 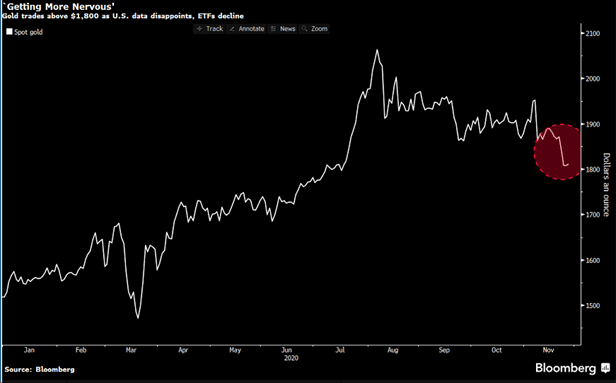 As investors are about to enter the final month of the pandemic year 2020, the attention will remain on the vaccine updates, Brexit and the global economic data to gauge the recovery which has the potential to bring more volatility to the markets. Equity Markets Recently, the vaccine updates and US politics have driven the stock market rally an...

XRPUSD- Point & Figure XRPUSD - It's been a wild few sessions for the cryptocurrency space as a whole, particularly with Bitcoin creeping back ...