The RCEP negotiations have taken around eight years and could not have come at a better time. The signing of the RCEP agreement on Sunday means that 15 Asia-Pacific Countries have signed the “World Largest Free Trade Agreement” in history at a crucial time where the region needs support and to rebuild from the COVID-19 pandemic.

Members of the RCEP – ASEAN countries, China, Japna, New Zealand, Australia and the Republic of Korea make up nearly a third of the world’s population or 30% of global gross domestic product (GDP).

Asian markets rose on Monday following the signing of the largest trade deal in the region. The Asia-Pacific Index rallied to a daily high of 187.65 since the beginning of the year. The ASX closed at 6,484.3, up by 79.1 points or 1.2% on Monday after it was forced to close early following a trading system failure which halted the market. 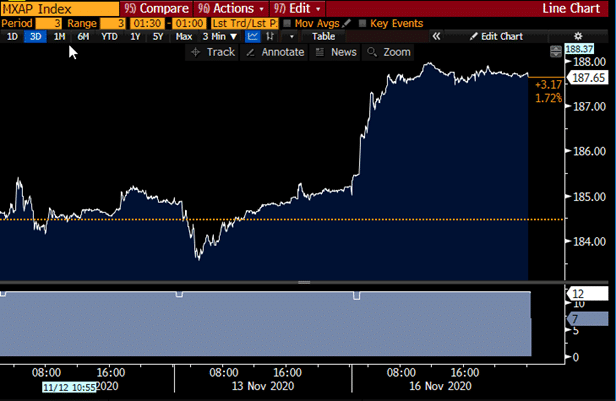 Overall, in a pandemic-induced environment, the agreement is binding those countries into a coherent trading zone which boosted RCEP members’ trade share. 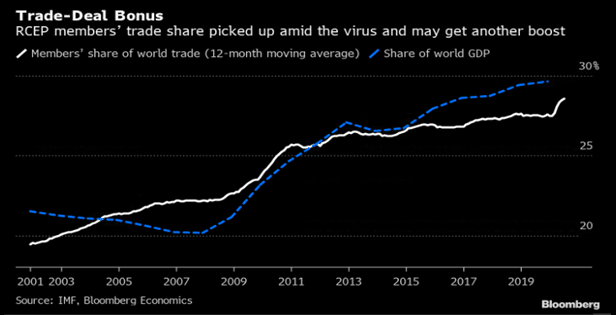 Back in 2019, India has pulled out of the negotiations from fear that China, being one of the biggest markets in the region will exercise greater influence over the rules governing the regional trade and flood the markets with cheap Chinese goods at the detriment of Indian manufacturers. The deal signed over the weekend will leave the door open for India to join as many countries in the region considered its presence important to balance the economic weight.

Markets have still welcomed the regional trade without India as free trade in the region will boost confidence and help to counter the negative impact of COVID-19 on their economies.

China is Australia’s biggest trading partner mainly demand for iron ore, and coal. In the last few years, the relationship between China and Australia started deteriorating and was further exacerbated recently following Australia’s calls for an independent inquiry into the outbreak of the COVID-19 disease.

Is the Trade deal a game-changer for China-Australia? Recently, more and more Australian goods are being threatened with China’s restrictions. The key risk for the Australian markets was the elevated deterioration in their relationship. It is hard to predict whether the two countries will be able to open dialogue but at a time where the Chinese Communist Party has frozen communications with Australian ministers, there is hope and expectations that the trade deal will initiate some sort of dialogue.

Even though the trade deal is yet to be ratified, a bit shallower compared to other trade agreements and investors are still apprehensive of the commitments from China, the RCEP provides a boost in confidence at a time of global trade uncertainty.

Asian markets had a strong start to the week following the signing of the world’s largest free trade agreement by fifteen Asia-Pacific countries after more than eight years of tricky negotiations. The agreement binds together countries which make up of nearly a third of the world’s population or 30% of global gross domestic product (GDP). On...

Week Ahead: COVID-19, Geopolitics, and A Busy Economic Calendar

Amid the various claims of voting fraud and rigged elections, the former vice-president, Joe Biden who won more than 77 million votes so far, the m...