Investors are generally apprehensive of the month of September as on average it is marked as the worst month for the stock market. After a staggering rally in August driven by broad-based vaccine optimism, global stimulus, improving economic data, better-than-expected earnings season and the outperformance of the technology sector, global equities went on a wild ride which saw some major corrections across the stock market.

September has again lived up to its reputation of being the worst and scariest month for the stock market.

September kicked off with a sell-off in the tech sector which triggered a bloodbath on Wall Street. Geopolitical tensions, Brexit woes, US stimulus gridlock, the uncertainty about the economic recovery and fears of a second coronavirus outbreak have created an environment of caution. Risk sentiment was on and off causing wild swings between gains and losses in the stock market.

US Stocks lagged Behind

Major US equities indices plunged the most in almost 3 months. As of writing, the indices have retreated by more than 1.5% on three occasions already and Nasdaq Composite led the losses underpinned by a tech rout. 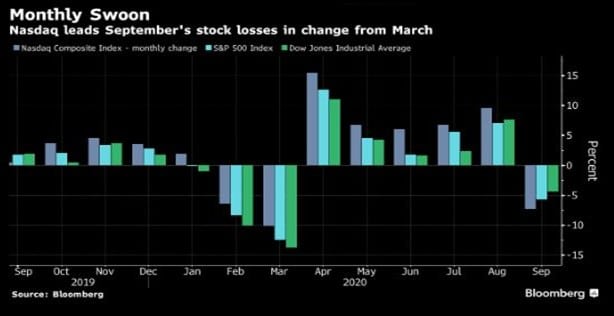 As of writing, the S&P500 is on track to record the worst month since 2018 against its global peers. 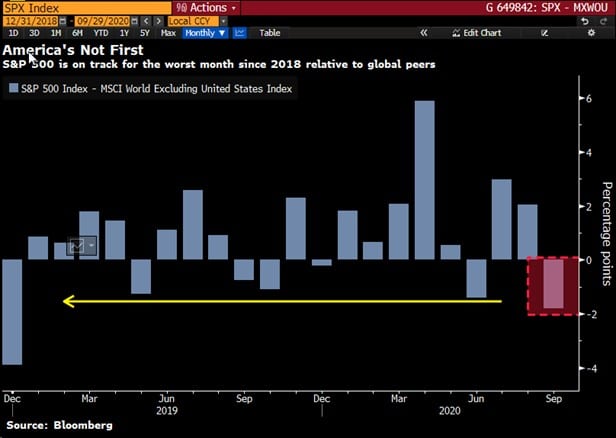 In a pandemic-induced environment, investors have relied heavily on fiscal and monetary policies from governments and central banks. The Federal Reserve has repeatedly emphasised on the importance of fiscal support given the limitations on the monetary side.

Ahead of the US election and amid a stimulus deadlock, investors struggled to push stocks higher. The US stocks have been lagging behind its peers in September. 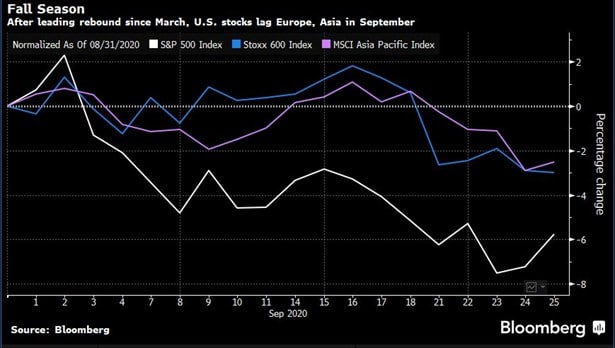 European shares also struggled to edge higher as the Continent and the UK grapples with a resurgence of coronavirus cases heading into winter. New restrictions are being imposed to contain the virus which is threatening the recovery process. ECB’s President Christine Lagarde also reiterated the “incomplete, uncertain and uneven” recovery in economic activity. 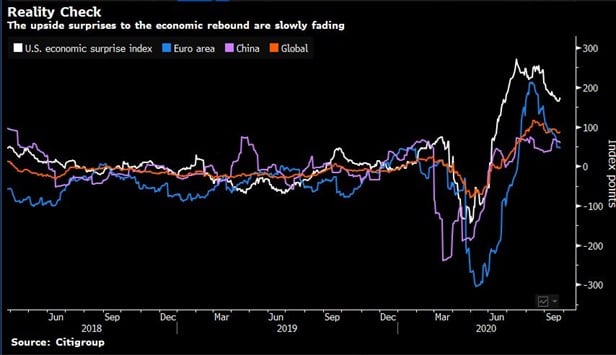 Australian shares are seen trading within a range since the last few months. The strict lockdown measures in Victoria have dampened sentiment and the S&P/ASX200 index had struggled to rise as much as its market peers. However, as the month comes to an end, investors are eyeing the eradication of the coronavirus and the prospects of interstates travels and easing of lockdown measures.

Compared to other countries which are still battling the pandemic and where there are more talks of lockdowns or restrictions, the worst may be over for Australia. Investors will likely monitor reopening and the recovery process. 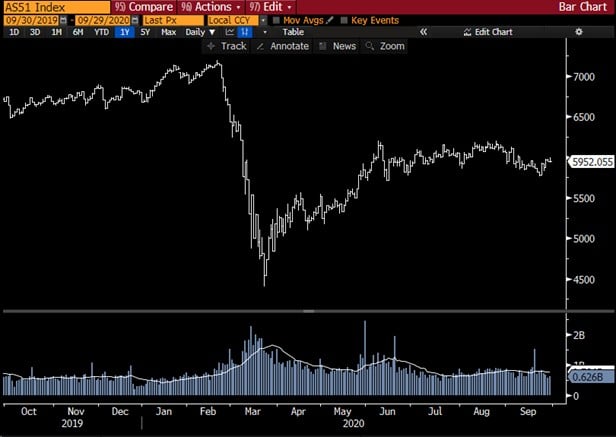 In the forex market, the month of September was a complete reversal of the price action seen in August. The US dollar gathered strength against nearly all the G10 currencies. Amid all the geopolitical tensions and an unparalleled health and economic crisis, investors sought safety with safe-haven currencies.

The focal point was the central banks’ next leg of action – major central bankers have joined the wagon for ultra-loose monetary policies for the next few years.

The New Dot Plot and the moderate inflation strategy adopted by the Fed has confirmed that borrowing costs will likely remain near zero through 2023 and quantitative easing will remain even longer. Ahead of the US elections, the political gridlock over the stimulus package has instilled fears that the US economy may not get the required support on time.

Since August, the XAUUSD pair has been trading within a range as investors digested some positive vaccines updates, improving economic data and easing lockdown restrictions. The indecisiveness of investors is reflected by the Doji candle on the monthly chart found at the top of the upside trend which suggested a sign of possible reversal of price direction. 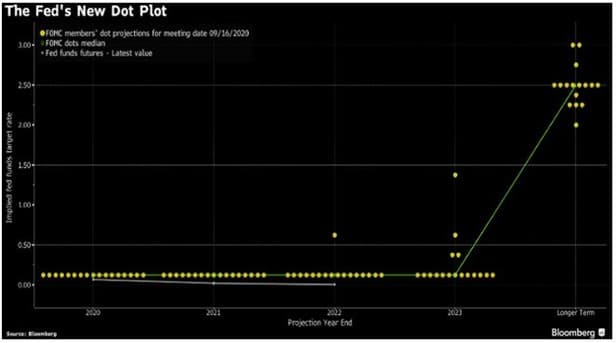 While the US share market is currently being underpinned by those political risks, the US dollar found strength as a safe-haven as other central banks were also increasingly more dovish in their forecasts.

The Bank of England (BoE)

The BoE was among the few that has explored the prospects of negative interest rates quite early during the pandemic. In its recent meeting, the BoE further explores the effectiveness of negative policy rates triggering some selling in the GBP-related currencies pairs which were already dampened by Brexit woes. The UK economy remains fragile by hard-Brexit rhetoric and the recent rising number of cases in the UK which could result in more social distancing restrictions.

Aside from the commodity-related currencies, the shared currency has rallied against the US dollar since March lows lifted by the initial successful containment of the virus in Europe compared to the US. The unprecedented stimulus package and unity among the European countries during the pandemic provide further support to the Euro.

As fears of a second outbreak mounts in the European regions, the signs of divergence in the economic recovery in the eurozone area has tamed the rise in the shared currency. Simultaneously, the ECB’s comments about the appreciation of the Euro has caught much attention.

President Lagarde acknowledges that the appreciation of the euro is being monitored because it can exercise a negative pressure on prices but stated that they do not target the exchange rate. The incoming data in the euro area also show a strong rebound in activity broadly in line with previous expectations. However, it remains well-below pre-coronavirus levels.

3rd Option: Lower rates in the economy a little more without going into negative territory.

Over the months, the Antipodean currency has rallied because of its higher interest rate over the US dollar and stronger iron ore prices. The calls for a rate cut and options like FX intervention or negative interest rates have pushed the Aussie dollar to the downside. The AUDUSD pair dropped from a high of 0.74 to a low of 0.70 during the month.

The Yen gained strength as a safe haven but mostly following the announcement that Japanese Chief Cabinet Secretary Yoshihide Suga will replace Shinzo Abe as the new leader. In a pandemic-induced environment, Japan may have avoided a new period of political uncertainty for Japan as the new Prime Minister looks set to follow the steps and framework pushed by the former Prime Minister Shinzo Abe.

In such environment of doubt, the predominant uncertainty for the markets is when will the world recover from both crises which prompted investors to either hedge or seek safety from volatile investments with haven assets like the gold.

The XAUUSD pair has been on a tremendous rally since the pandemic rattled the markets and reached a high of $2,075 in the month of July. Since August, the XAUUSD pair has been trading within a range as investors digested some positive vaccines updates, improving economic data and easing lockdown restrictions.

GBPAUD - Hourly GBPAUD -   We saw GBPAUD attempt a stronger recovery last month, but it appears the Pound may not have the resolve to push higher as we enter into October. In today's Chart of The Day, we examine the hourly chart using the Ichimoku method. In the shorter-term, it appears the latest weekly pivot points of 1.80 and 1.77 play...

AMZN - Daily Amazon.com (AMZN) -   As a retail conglomerate, it doesn't get much bigger than Amazon listed on the US Nasdaq exchange. Despite...